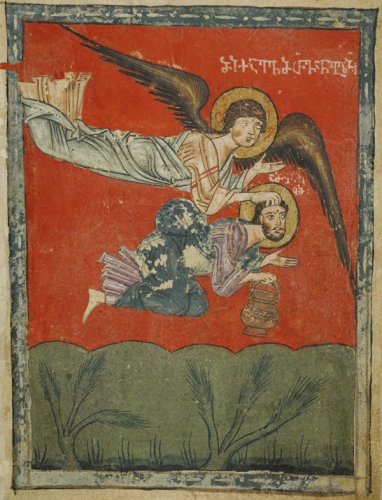 
Among the illustrated manuscripts of the XI century Ekvthime Mtatsmideli's synaxarium can be noted: The manuscript has preserved only 78 miniatures showing the Saints and the scenes from the life of Christ. The miniatures stand out for their top-quality fulfilment. In the end of Alaverdi Four Gospels the Letter of Christ to Augar is placed. The message is magnificent not only for its perfection of fulfilment, but it is unique from the viewpoint of decoration. The brief text is richly decorated with miniatures and artistic initials. All the main tendencies which were weak in the X century become well established in the XI century. In the XII century all these achievements were repeated, the decoration became richer and more solemn. The XII century is presented by a group of manuscripts which are unique by their artistic properties, incomparable painting methods and colours (Gospels from Gelati, Jruchi, Works of Gregory the Theologian, Astronomical treatise). Many of them were illustrated.

From the XI century decoration of Georgian manuscript Four Gospels acquires full artistic form both in the combination of the ornamentation elements and in their distribution in the text: in the beginning of the manuscript, after Eusebius's letter, canons are given. The evangelists are painted before each Gospel. The first pages of the Gospels have headpieces, each stanza begins with a capital letter. In rich manuscripts the text is also illustrated.

In the XI—XII cent. manuscripts the composition of a decorative page is characterized by a classical clearness. This is caused by the fact that some elements of decorum, canons or headpieces in the general artistic ensemble are separated from each other.

Gold in the combination of colours increases the decorative effect. Painters of this period present space conventionally by means of golden background. Gold in miniatures covers the space round the picture. We know only one case where miniatures were made on gold (the Gospel from Mokvi, 1300); the colouristic aspect is special here; gold is combined with the pearl blue, wine red and green colours). In the manuscripts with more painting golden contour outlines each ornamental detail, gold is used to finish furniture, clothes, sometimes in the case where the form requires lightening, painter covers gold by touches (the Second Jruchi's Gospel) or presents folds of the clothes by means of beamlike lines (Synaxarium of Ekvthime Mtatsmideli). The gold is still gleaming and clear now. In this aspect the miniatures of Gelati's Gospel particularly stand out. Gold is especially clear and contrasting on the background of the Devil's figure which is painted as a light black silhouette in the scene of temptation of Christ.

In the manuscripts of the XIII century we note tendencies not only towards breaking of the decorative frames but towards entering of the ornament into the text. The initial letter is more complex, it becomes longer along the vertical column of the text. Decorative framing of miniatures is often connected with the composition characters or architecture: some details break the frame limits and fill the empty space of the pages. The classical limitation of disposition of figures is changed by their free, dynamical distribution.

Among the illustrated secular works the manuscripts of "The Knight in the Tiger's Skin" occupy an important place. In the ornamentations of manuscripts of the XVII century one can notice the influence of Persian miniature paintings which was due to political situation of Georgia experiencing Persian influence in the life of upper classes of society. However, it should be noted that in a number of manuscripts the authors show their own typical manner of writing or presentation of the content of composition. In the manuscript of "The Knight in the Tiger's Skin" belonging to King Giorgi XI, the artistic borders and the text are made on a whole leaf as a contrast to Persian manuscripts, and the golden ornamentations on each page are quite different by their pattern.

Unique manuscripts had been mainly made on very good parchments and had chased frameworks (manuscripts from Lapskaldi, Tbeti, Alaverdi, lenashi, Gelati, Tskarostavi,). Most oi the framework had been made at the same time as the manuscripts were written. The frameworks of the Four Gospels from Tskarostavi and Berta were made by the well-known masters Beka and Beshken Opizari.

The history of manuscripts is one of the most brilliant pages in the whole history of the Georgian culture.