Caucasus mountain range, on the territory running between the Enguri andTskhenistskali Rivers. Surrounded by the gigantic, white-capped peaks of the Caucasus, Svaneti is one of the most remarkable regions of Georgia with a rich history and picturesque natural beauty.

Svaneti is divided into two parts, Upper Svaneti and Lower Svaneti, separated by the Svaneti Mountain Range. Upper Svaneti, called "Zemo Svaneti" in Georgian, has always been a region defined by its isolation. The first road accessible by car from Zugdidi to Svaneti was built in 1934. Prior to that, roads to Svaneti were only passable by carriage, horse, or foot. Motorways now connect all villages. New road from Zugdidi to Mestia is currently being built. That will reduce the travel time be­tween the two destinations to only 2 hours. Svaneti is 500 kilometres away from Tbilisi and the trip takes around 8-10 hours.

At 2000 meters above sea level, the climate of Upper Svaneti is humid and cold. The average annual tem­perature is 5.70C with temperatures in January averaging -6.40C and 16.40C in July. In the highest altitude areas of Upper Svaneti the climate is humid, characterized by an absence of a real summer.

WHAT TO DO IN SVANETI

There are many places in Upper Svaneti where one can walk, enjoy nature and rest. Some of the most attractive places include the Koruldi Lakes; the view from Hatsvali and Zuruldi in Mestia; access to the "Heart" glaciers; the waterfall at Becho Pass; Shikhra Valley under Ushba mountain in Becho; the road

leading to Shkhara in Ushguli; the landscape of the Caucasus Mountains from Kvirike Church in Kala; the forest, alpine valleys and river gorg­es in Mulakhi; road leading toTetnuldi through the village Adishi in Ipari; views of Tetnuldi and Ushba from the Ugviri pass in Tsirmi and leli; and the panorama of Enguri Gorge in Tskhumari. Soon a large part of the region will become a national park. Upper Svaneti is rich with mineral waters, referred to as"Sgim"or"sour water" by Svans.

WHAT TO SEE IN THE SVANETI REGION

The majority of tower settlements in Svaneti come from the early middle ages. Svan towers were primarily used as defensive structures. Most of these towers are 20-25 meters tall and have four or five floors, although you can find a few rare towers with six floors. The tower levels are con­nected to each other via internal wooden staircases. The towers are covered by gabled roofs, with several narrow defence windows. On the highest floor there was usually a platform for air attack during invasions. The towers were built from local stone and rock. Currently, the majority of these towers have lost their function, although a notable exception is that some families still use the upper floors of the towers for storing crops.

Svan fortresses, which at the same time served as residences, are very interesting to see. In the event of an attack they were used to protect their inhabitants. Unlike the Svan towers, such fortresses were not very tall and usually had only three

floors. The first floor was for dwell­ing and animal stalls, the second floor was used for trade, although during the warmer months of the year it was used for dwelling as well.

Mestia, the main regional center of Upper Svaneti, is 456 km from Geor­gia's capital city, Tbilisi. The district is located 1,500 meters above sea level. Tourists interested in religious culture will find plenty of examples of wall paintings and icons from the Middle Ages in the churches around Mestia. Within Mestia, Saint George Church has preserved crosses and icons from the 12th century. Also, Pusdi Church still contains fragments of 13th century wall paintings.

The Church of Christ in Lagami, a vil­lage near Mestia, is a good example of traditional basilica style architecture. According to local legend, the first floor of the church dates back to the 13th century. It is well known for its frescos and the church's facade includes fragments of the original paintings.

THE HISTORIC AND ETHNO­GRAPHIC MUSEUM

Most of the treasures of Svaneti are collected in the Historic and Ethnographic Museum of Mestia, which was founded in 1936 on the basis of the collections of the Church of Saint George, in Seti. Among the museum exhibits, highlights include icons from the Middle Ages and ancestral artifacts from the noble family Dadeshkeliani dating back to the Middle Ages. In addition, the following exhibits are at the museum: samples of metal chasing work from the 11th century, heirlooms from the Svaneti Dadeshkeliani royal family including chests, a saddle gilded in silver, and household items, and an exposition of Vittorio Sella's prints, an Italian photographer who traveled in Svaneti in 1889, 1890, and 1896, took photographs of Svaneti's landscapes and settlements, and documented the daily lives of the local inhabitants.

THE MEMORIAL HOUSE OF MIKHEILKHERGIANI

The Memorial House of Mikheil Khergiani, a famous Georgian mountain climber, was founded in Mestia in 1983. Mikheil Khergiani became fa­mous in Georgia and abroad by participating in many mountain expeditions and climbing competitions. Khergiani was distinguished by his exquisite rock-climbing abilities; he saved many people during mountain rescue missions. Khergiani died tragically in Italy, in the Dolomites Mountains in 1969. The exposition in the museum documents episodes from his life.

Latali was one of the strongest and richest communities of Upper Svaneti for centuries. While vil­lages around Latali are known for their churches, the region itself has earned a reputation for its talented musicians. During festivities, as well as during mourning, visitors can enjoy ancient polyphonic songs. One church worth visiting in Latali is the Matskhvarishi Church, which was constructed during the 11th and 12th centuries. Of special note is the painting of the crowning ceremony of King Demetre I.

Tskhumari, together with Etseri and Becho, was part of Svaneti. The town of Tskhumari, together with surrounding villages, was known during the Middle Ages for its work­shops that produced masterpieces of engraving. Churches of note in the region include the Church of Archangels of Labskaldi and the Church of Archangels in the village of Svipi. Both served as treasuries during the Middle Ages.

Becho was historically known as a trade center. The pass that connects Upper Svaneti to the North Caucasus is in Becho. There is one church of interest near Becho - the Church of the Messiah in Chokhuldi, which was built in the 11th century and con­tains the 13th century icon of the Archangel. 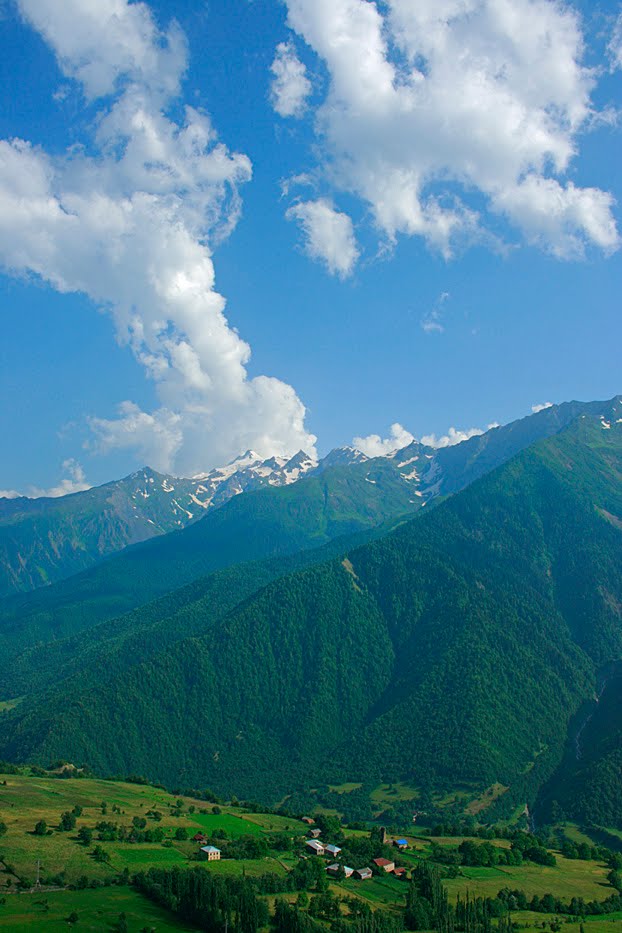 Etseri and its surrounding villages are known for churches dating back to the Middle Ages. One of the most beautiful churches in the community is the 10th century Pkhutreri Church of the Archangels. The church, which was built using carved stones, still contains original paint­ings from the 11th century.

The community of Pari is known for the 10th century Saint George Church located in the village of Svipi. Paintings in this church date back to the 14th century. This church also

contains engraved icons and crosses made in Svaneti workshops during the 12th century.

Ushguli is home to the remnants of one of the most ancient fortresses of Svaneti, dating from the reign of Queen Tamar: it includes 37 towers thought to date back to medieval times. Ushguli itself is a historical settlement located in the very east of Svaneti and is one of the highest settlements in Europe (2000-2200 meters above the sea level). It was part of so-called "Free Svaneti"- for centuries the people here have defended the region against numerous attacks. Ushguli's ancient constructions, just like towers and churches of Svaneti, are under the protection of UNESCO. The Church of Saint Mariam Mother of God is located on one of the highest points in Ushguli, together with a building tradition­ally used as a meeting place for village elders.

The most significant cultural sites in Kala's area are the Iprari churches of the Archangels and Saint Kvirike (in Lagurka), painted by Theodore, the artist of King David the Builder, who lived at the end of the 11 th century and during the first half of the 12th century.

The Lagurka Church is the biggest worshiping place in Upper Svaneti. On July 27th in Kala there is a celebration for Saint Kvirike, which is attended by a large part of the local population. In Svaneti, Kvirike is known as an agricultural divinity, which oversees fertility in both people and animals.

The biggest and most decorated church in this community is the Nakipari Church, built in the 10th century. Artwork in this church was painted by Theodore, King David the Builder's painter. The church also contains an icon of Saint George from the 11th century, carved in gold and silver.

The village of Adishi, one of the most ancient settlements in Svaneti, is lo­cated several kilometers away from Ipari, under Mount Tetnuldi. The village has four churches: the Church of Christ, the Church of the Archangel, and two churches of Saint George. The Church of Christ used once contained icons from the 11th-14th centuries (now stored at a museum), as well as a manuscript of Shatberdi, including detailed artwork, dating back to 897, known as the four-chapter book of Hadishi.

leli is home to six churches from the 11th-12th centuries: Saint John the Baptist, Saint George, Saint Kvirike, the Church of Christ, LaMaria and Saint George. Only fragments from these churches' original frescos remain. The churches have preserved 11 th and 12th century crosses, icons, and ritual artifacts.

The village of Atsi is located two kilo­meters from leli and has two church­es: LaMaria and the Archangel. La Maria Church is home to two ancient flags with Georgian script and cloth­ing from a regional bishop. The 11th century paintings in the Church of the Archangel are damaged, but the icon of Saint Mikael from the same period still remains.

Muzhali is known for its churches. The Church of Christ in Muzhali dates back to the 10th. The church's artwork - which includes the use of unique paint - indicates that there were cultural links between local artists and the central schools of painting in Tbilisi. 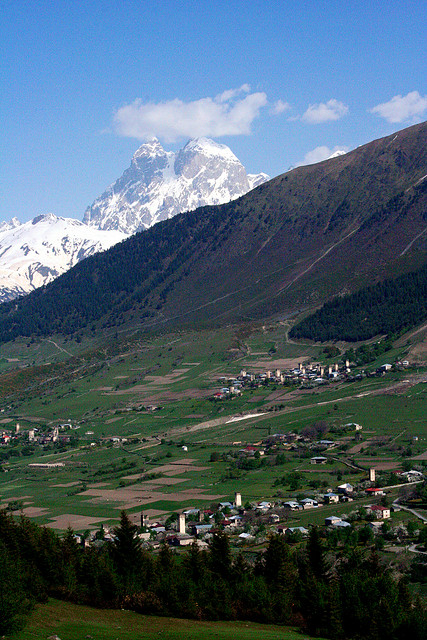 The most interesting sites in Mu-lakhi include tower-houses and the Church of Christ, with paint­ings dating from the 13th century. The site also includes an icon of Saint George from the 10th cen­tury and other 16th-18th century