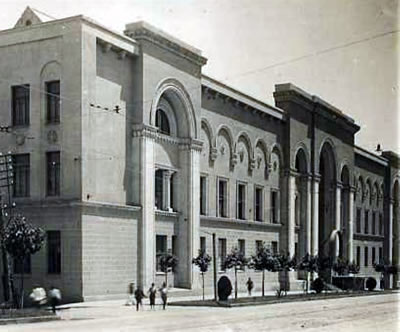 The origins of the Simon Janashia Museum of Georgia stem from the founding of the Museum of the Caucasian Department of the Russian Royal Geographic Society on May 10, 1852. In 1865 on the initiative of Gustav Rade the museum of Caucasus was established on the basis of the above mentioned department. The first exhibition was held in 1867.

In 1881 the museum of Caucasus took an active part in the fifth international congress of archeologists, held in Tbilisi. In 1919 the museum of Caucasus was named the Georgian Museum. In February, 1921, the Georgian government made a decision about moving provisionally the state treasure from Georgian museums and churches out of Tbilisi due to the Soviet aggression towards Georgia.

The treasure was first moved to Kutaisi and then to Batumi, but soon, packed in 248 boxes it was carried to France. In spite of the great obstacles, the famous Georgian public figure, Ekvtime Takaishvili could preserve and bring back to Georgia all the state property. After the Soviet occupation a new stage of the museum development has started. In this period the scale of scientific research has noticeably increased and the unique expeditions have been held in frameworks of the museum.

Since 1947 the museum's been named after Simon Janashia. The museum had to operate in an extremely tense situation in the last decade of the XX century. In 2004 the museum was incorporated into the Georgian National Museum. Nowadays, the great reformations have being carrying out in the museum aiming for setting the modern standards of reservation and exposition of the museum collections.

One of the most amazing exhibits in the museum is the prehistoric human remains found in Dmanisi. These remains date back to 1.8 million years and are the oldest sign of human existence outside of Africa. One of the most important collections of the museum is the Gold treasure, which consists of the unique collection of the pre-Christian (III millennium BC-IV century AD) goldsmith pieces. The unique Zoological, botanical, geological and ethnographic collections, photo archive and the video fund are also preserved in the museum.

E-mail: This email address is being protected from spambots. You need JavaScript enabled to view it.
Web-site: www.museum.ge
Date of establishment: 1852
Type (profile): History Museum
Quantity of stored items: 1200 000