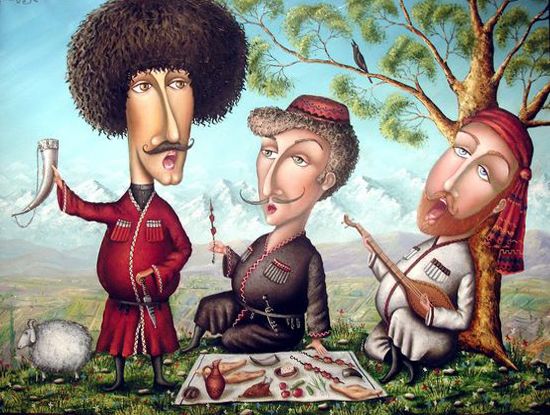 Folk music, namely polyphonic choir performance traditions have a special place among the cultural values of the Georgian people. The Georgian folk music can be considered unique without any exaggeration in the world music culture. If we imagine the world music map, we shall see that Georgia is a polyphony oasis in the desert of monody, one part musical traditions. The tradition of polyphony has been preserved from ancient times till today.

Every region of Georgia has its own tradition of specific musical dialect and the manner of performance, none the less all of them share the same intonation and harmony characteristics. Here the parallel can be made with the diverse nature of the country. It is the style that occurs in three specific forms from : the complex polyphony found in Svanetia, whereby all the voices follow the same rhythmic pattern, producing chordal progression; the polyphonic dialogue typical of Eastern Georgia with two high voices over a drone bass; and the contrastive polyphony widespread in Western Georgia and characterized by predominantly three-part writing.

Georgian folk songs are generally written in three-part polyphony, though four-part writing is also found, as is clear from Gurian and Adzharian work songs. Unison singing has survived in a few mountainous regions such as those inhabited by the Khevsur and Tushetians, and individual examples of monophonic songs are occasionally found in both Western and Eastern Georgia. They include work, cradle, burial and mourning songs and are sometimes accompanied by native See instruments.

On hearing a recording of the Gurian marching song, Khasanbegura, Igor Stravinsky said: "One of the most impressive recent musical experiences I owe to? the tapes of polyphonic singing recorded in mountain villages near Tiflis. The discovery of an active performing tradition of music ranging from tenth-century conductus and organum to High Renaissance was a major find, I think, contributes to performance knowledge being even more valuable than acquisitions of more music? The yodeling, called 'krimanchuli' in Georgian? is the most virile vocal performance I have ever heard."

It is natural that the rich musical tradition gave birth to the professional ecclesiastic music right after the introduction of Christianity in Georgia (IVth century). This genre was especially developed in local ecclesiastic academies and schools (Gelati, Ikalto) and the Georgian cultural centres abroad (Jerusalem, Athoni, mount Sina, Petritsoni (Bulgaria)). The collection of hymns of VIII-X centuries (the most famous of which are the hymns of Michael Modrekili of IX-X cc.) provide with the wide variety of texts and original musical symbols. Georgian and foreign researchers are working to decipher them.
All these songs reflect the creative imagination of the Georgian nation, its highly developed auditory sensitivity and complex and sophisticated musical thinking. It is no accident that in 1977 a recording of the song Chakrulo was launched into space on board an American space probe as an example of human civilization.
Unfortunately due to historical and political situation Georgian culture was cut from the main stream of development of the European musical culture. Only in the XIX century despite the annexation of Georgia by Russia and the subsequent colonial policy and Russification, Georgia began to develop its academic national musical culture with the orientation to the European music. The acquaintance with the European opera brought about the development of this genre and in a number of years the national operas were created by the composers Z. Paliashvili, M. Balanchivadze, D. Arakishvili and V. Dolidze. The 20ies - 30ies of the 20th century were marked by the development of chamber and symphony music genres.

Georgian music culture is acknowledged in many countries of the world. composers G. Kancheli, S. Tsintsadze, S. Nasidze, Conductor - J. Kakhidze, Violinists - L. Isakadze, M. Iashvili, Piano players - E. Virsaladze, L. Toradze, Singer - P. Burchuladze, laureate of a number of international competitions - Georgian State String Quartet, Georgian State Chamber Music Orchestra enjoy the success in the leading concert halls of the world.
The existence of first-rate symphony orchestras, musical theatres in different cities, wide network of musical schools, distinguished original national school of composers seem unbelievable if one takes into account the fact that the academic music as understood under European standards counts only a number of decades. In fact it originated at the end of the XIX and the beginning of XX centuries. The prerequisite for the swift development lies in the high potential and ancient history of the Georgian musical culture. The AD manuscripts give information on Georgian civilization - Sumerian cuneiform inscriptions mention the original musical rituals of the tribes residing on the territory of Georgia. The archaeological excavations revealed the ancient musical instruments, salamuri (pipe), changi (string instrument) etc. dated back to XVIII - XXV AD. The importance of music in the lives of Colchis and Iberians was stressed by ancient Greek historians Herodote, Xenophon.

Georgian Congregational Song
Christanity became the state religion of Georgia in the first half of 4th century, in 337. Since that time, Christian cathedrals are built and divine services are conducted and, accordingly, Christian church singing began. Originally, Georgian church singing underwent foreign influence. That influence came from Palestine and Syria, on the one hand, and Byzantine, on the other hand. But the original hymnographical patterns are crweated since the 5th century.
Georgian church singing of the 7th century was already liberated from foreign influence. The stream of polyphony came into church singing, that caused nationalization of Georgian songs of wordship. This process was based on the abundance of the elements of folk music, which depended more in the following centuries.

I looked for you little grave,
My heart choked with pain.
I wept and called out Souliko,
Overwhelmed by your misfortune.

I saw a rose in the forest,
From which dew ran like tears.
In my sorrow, I cried: "Souliko,
Is this you, who has flowered so far away?"

A shivering of leaves above me,
And through the dark, silent underwood,
The nightingale's song resounding,
As if he were saying: "It's me".