Nekresi Monastery, located on the slope of a forest hill near the village of Shilda (Kvareli district), displays a beautiful view of the Alazani Valley. It is home to a number of preserved buildings and ruins from various periods, such as a small basilica dat­ing from the 4th century (one of the earliest basilicas in Georgia), an Epis­copal palace dating from the 8th-9th centuries, a 16th century tower as well as ruins of other residential and domestic structures and small chapels.

This cross-domed church of Akhali (New) Shuamta was built by Queen Tinatin, wife of the King of Kakhe-tians, Levan. Built of brick, it is distin­guished for its elevated proportions and facade adornment, featuring crosses set in the brick masonry. A large, three-storey bell-tower, stand­ing nextto the church, used to house living rooms of Queen Tinatin. 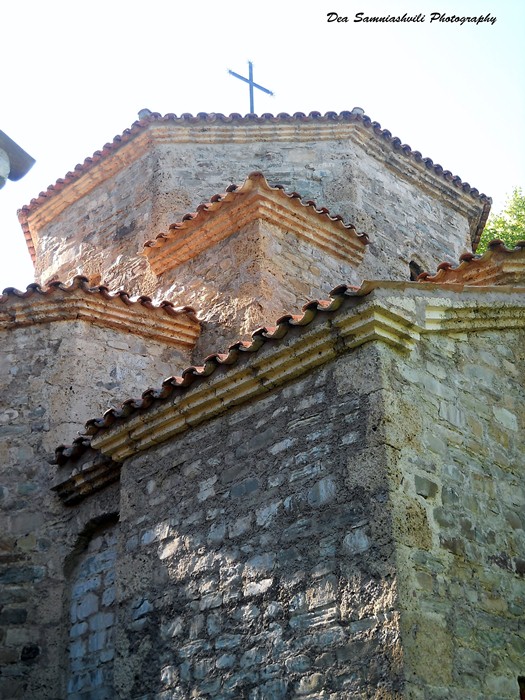 The architectural ensemble of Dzveli (Old) Shuamta is located in a forest, 7km from Telavi. The complex of ancient churches consists of three churches, namely a 5th century ba­silica, a 7th century church similar to Mtskheta Jvari and a 7th century minor domed church. The churches are plain and laconic, characteristic of the Kakhetian architecture.

This impressive cross-domed, tetra conch church of St. George, 18km away from Telavi in the Alazani Val­ley, was founded in the 6th century by loseb Alaverdeli (one of the Syr­ian Fathers). The existing church was built in the first half of the 11 th century. This impressive (more than 50m high) building is characterized by elevated proportions, plain fa­cades and a grand inner space typi­cal of Kakhetian architecture. Within the circuit wall are Peikar Khan's Pal­ace (12th c), a barracks, a refectory, a wine cellar and other structures.

The medieval monastic ensemble of Ikalto is most notable for the ru­ins of the old academy, a religious and educational centre during the middle ages. The building dates from the 8th-9th centuries with its most noteworthy Church of the Transfiguration (8th-9th centuries). The prominent Georgian philoso­pher Arsen Ikaltoeli worked at the Academy in the period between the 11 th and the 12th centuries. Accord­ing to legend, the famous Georgian poet Shota Rustaveli, author of the 12th century epic Knight in the Pan­ther Skin, studied here. It is said, that every pupil kept a jug of wine under his desk, called a "doqi". When com­prehension flagged, a cup was used to brighten the senses and re-stoke inspiration.

The Church of the Dormition (called Kvelatsminda), built in the 8th cen­tury is one of the most significant monuments of the transitional pe­riod. It is the only double-domed church in Georgia. Compared with the earlier monuments, it displays a greater tendency towards decora­tion and is more characterized by el­evated proportions. The church has a spacey interior. It is built of thick cobble stone, typical of Kakhetian architecture; structural parts are of travertine, which adds a pictorial effect to the surface.

Vashlovani Protected Areas are lo­cated in the extreme eastern part of Georgia, in the Dedoplistskaro dis­trict. It consists of Vashlovani Strict Nature Reserve, Vashlovani National Park and Natural Monuments as follows: "Eagle Gorge", "Takhti-Tepa mud volcanoes","Juma Bay"and"Ala-zani Floodplains", total area of which is about 24924 ha. Vashlovani Pro­tected Areas were opened in 2003.

Lagodekhi Protected Areas are lo­cated in the most northeastern part of Georgia, in the Lagodekhi District. This includes the Lagodekhi Strict Nature Reserve and Lagodekhi Managed Nature Reserve along the southern slopes of the main range of the Great Caucasus. The height of the Protected Areas varies within 400-3500 m above sea level. Recently Azerbaijan has signed an agreement with Georgia to allow hikers to pass back and forth over the border freely.

David Gareji, Sagaredjo At present there are 16 medieval architectural monuments in the re­serve. The monastery was founded in the 6th century by David, one of the thirteen Assyrian monks.

The museum is located in the palace of the well-known Georgian poet, where one can see objects repre­senting the poet's life and creative works. In 1835 there was built one of the first in wine cellars in Georgia. There is kept a unique collection of wine from many countries.

The reserve includes the 16th c. Archangel church, a 16th c. wine cel­lar with a winepress, and districts of merchants and nobility. In the Gremi Museum (15th c. monument - a king's hall and three floor tower with a bell-tower) are displayed objects, unearthed in the reserve area.

The museum houses memorial ob­jects of the poet and his family, poet's manuscripts, paintings, and archive of documents and photographs.

The memorial museum complex of the famous Georgian painter Niko Pirosmanashvili (1862-1918) in­cludes a house with supplementary buildings and an Exhibition Hall con­taining original works. The museum houses the personal belongings of the painter, a lithograph by Pablo Picasso "Portrait of Pirosmanash­vili", works of 20th c. Georgian artists, manuscripts, etc.

The museum houses an archaeo­logical collection from the Second Millennium B.C. and Late Bronze Age ceramics, adornments and weapons. It also features a 5th-19th c.c. numis­matic collection, ethnographic ob­jects from the first half of the 19th c, 20th century works by famous Georgian painters, etc.