The earliest Neolithic evidence for the beginnings of a true wine culture, in which wine dominated social and economic life, comes from Georgia. Shulaveris-Gora, south of Tbilisi, has yielded what may well be the oldest "domesticated" grape pips (Vitis vinifera vinifera), dating from the early 6th millennium B.C. The domesticated vine’s main advantage over the wild type is that it is self-pollinating, thus enabling it to produce a larger and more predictable fruit crop. Besides selecting plants that yielded larger, juicier, and tastier fruit with fewer seeds, the early Neolithic horticulturalist also discovered how to “clone” the grapevine by rooting and grafting branches.

The invention of pottery during the Neolithic period was crucial for processing, serving, and storing wine. Again, 6th millennium B.C. sites in Georgia--Shulaveri and Khramis-Didi-Gora--have yielded the earliest, most important evidence. Jars, with reddish residues on their interiors (wine lees?), were decorated with exterior appliqués which appear to be grape clusters and jubilant stick-figures, with arms raised high, under grape arbors.

Impressive and unique artifacts characterize the so-called Trialeti culture of the early 2nd millennium B.C. Large burial mounds (kurgans) at Trialeti itself, west of modern Tbilisi and other sites of the period have yielded marvelously ornate gold and silver goblets, often depicting drinking scenes or ceremonies. Grapevine cuttings were even encased in silver, accentuating the intricate nodal pattern of the plant.

Traditional Georgian grape varieties are little known in the West. Now that the wines of Eastern and Central Europe are coming to international awareness, grapes from this region are becoming better known.

To date up to 500 varieties of wine have been described in Georgia, the country having no rival in terms of number. When reference is made to  the historical territories of vine growing, it should be borne in mind that  the mixed geoclimatic conditions in different regions of Georgia determined to a considerable extent the functional or outward  appearance of the vine varieties, as well as the characteristic quality of vine.

Although there are nearly 500 autochthonous varieties to choose from, only 42 of them are officially grown for commercial viticulture in Georgia:

Kvevri is a special vessel for making wine. The production and consumption phases have been developed over thousands of years to the present time, and Kvevri still maintain the same importance in wine-making as ever before in South Caucasus. Many Georgian families unchangeably and strongly follow their rich culture of making wine. They own special places called Marani beside their houses, with different sizes of  - Kvevri-es buried.

In the traditional Méthode Kartuli, wine is produced by carrying out spontaneous fermentation with the grape indigenous flora within clay vessels – Kvevri – buried in the ground. The fermentation takes place in a slow and natural way, without addition of either sulfite or yeasts. The Kvevri remains sealed during the period of fermentation, which can last several months. Due to differences in the grape varieties, grape flora and the lack of control on the process, variations on the progression of the fermentation and development of off-flavors may occur. As a consequence, special know-how is needed when using this technique in order to attain wines of good quality.

based on: Magic Tour

As deeply satisfied as you’ll find yourself after any Georgian repast, it ultimately would be incomplete without the magnificent red and white wines that accompany every lunch and dinner. Just as we in the West so often mistakenly called the former Soviet Union “Russia” as though the two were synonymous, we also tended to think of vodka as the alcoholic beverage that lubricated every festive occasion throughout the former empire. Nothing could be more inaccurate with respect to Georgia. 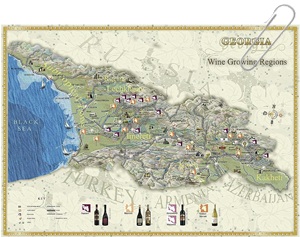 Georgian life remains rooted in the Bacchic tradition, in which reverence for the grape influences everything from Christian iconography to the oral traditions embedded in toast-making. St. Nino, the Cappadocian nun who brought Christianity to Georgia in the fourth century AD, made her cross from vine branches tied with her own hair. This remains the cross of the Georgian Church.

Georgian winemaking is an ancient art. In fact, Georgia is thought to be the place where viticulture began. Hugh Johnson in his book Vintage: The Story of Wine has this to say: “Archaeologists accept accumulation of grape pips as evidence (of the likelihood at least) of winemaking … the oldest pips of cultivated vines so far discovered and carbon dated-at least to the satisfaction of their finders-were found in Soviet Georgia, and belong to the period 7000-5000 ВС.” Additional archaeological findings are large kvevris, cone-shaped clay jugs buried in the ground, which stored wine and allowed it to mature.

Most wines take their names from their place of origin. The most famous wine-growing regions in Georgia are Kakheti, Imereti, and Racha-Lechkhumi. The autonomous republic of Abkhazia also produces excellent wines, especially in the regions of Gali, Gudauta, and the city of Sokhumi. Most wines have a strength of 10-12 percent alcohol. They possess amazing purity which generally allows for huge intake and no raging hangover later. You will most likely encounter the famous wines described below. You can taste an even larger selection at a sachashniko, or wine-tasting shop.

Rtvelli, the grape harvest, occurs in early October. While the great wine cellars of the major vinyards have bins carefully catalogued by year, the wine labels themselves do not carry a date. Questioned about this, a friend remarked that Georgians enjoy drinking their wine, not worshipping it as though at a shrine.

Gurjaani: Of a pale straw color, fruity bouquet, and piquant flavor, this wine is made from Rkatsiteli and Mtsvane grapes cultivated in the Gurjaani, Sighnaghi, and Sagarejo districts of Kakheti.

Manavi: Ranging in color from pale straw to straw green, this much-loved wine has a fruity aroma and finely balanced flavor. It is made from the Mtsvane grape cultivated in Manavi, Kakheti. The author has come to associate this wine with the particularly fine ruins of an ancient fortress on the outskirts of the town. Napareuli: This wine has a pale straw color and light fruity flavor. It is made from Rkatsiteli grapes cultivated in the Napareuli district of Kakheti. Rkatsiteli: From Rkatsiteli grapes cultivated in Kardanakhi, Kakheti, this wine undergoes the process of fermentation in clay jars buried underground, a unique Kakhetian practice. It has a dark amber color, a rich fruity bouquet, and a very smooth taste.

Tsinandali: The pride of Georgian wines, made from Rkatsiteli and Mtsvane grapes cultivated in Telavi and Kvareli, it matures for three years in oak barrels in the cellars of the Tsinandali winery. For information concerning an excursion to this winery.

Akhmeta: Made from Mtsvane grapes cultivated in the Akhmeta district of Kakheti, this wine is of a greenish straw color and possesses an admirable light sweetness. Chkhaveri: Grapes grown in the Bakhvi part of western Georgia and Abkhazia make this pale wine infused with a pinkish tint and hints of the flavor of apples. Tetra: Rachuli-Tetra grapes are cultivated in the Ambrolauri district to make this naturally semisweet wine, which has a fruity and delicate exuberance.

Akhasheni: Often found on the tables of Georgian homes, this wine comes from Saperavi grapes cultivated in Akhasheni of the Gurjaani district in Kakheti. This wine, along with Kindzmarauli and Khhvanchkara, is sometimes referred to as “the blood of giants.”

Khvanchkara: An excellent red wine made from Alexandreuli and Mujhureteli grapes cultivated in the village of Khvanchkara in western Georgia. This wine has the dubious distinction of having been Stalin’s favorite; you will inevitably hear this upon its being served. Extremely popular, it has a dark ruby color with a potent aroma and bouquet.
Kindzmarauli: On par with Khvanchkara, this wine comes from Saperavi grapes cultivated on the slopes of the Caucasian mountains in the Kvareli district of Kakheti. Rich burgundy in color, it is full-bodied and sinuous.

Georgian champagne is pleasant and refreshing, though a little too sweet if you enjoy chewing a Mumm’s Extra Dry.

Chacha is the Georgian aquavit, made from undis-tilled alcohol produced from grape pulp in oak barrels. With 50 percent alcohol or greater, this stuff can really knock you for a loop. Georgian city dwellers often buy chacha directly from farmers who make large volumes of it at harvest time. Be warned, therefore, that a Georgian host may well keep his supply in a champagne bottle. If you don’t hear a pop when you open a bottle, go slowly.

Traditional Georgian grape varieties are little known in the West. Now that the wines of Eastern and Central Europe are coming to international awareness, grapes from this region are becoming better known.

To date up to 500 varieties of wine have been described in Georgia, the country having no rival in terms of number. When reference is made to  the historical territories of vine growing, it should be borne in mind that  the mixed geoclimatic conditions in different regions of Georgia determined to a considerable extent the functional or outward  appearance of the vine varieties, as well as the characteristic quality of vine.

Although there are nearly 500 autochthonous varieties to choose from, only 42 of them are officially grown for commercial viticulture in Georgia: