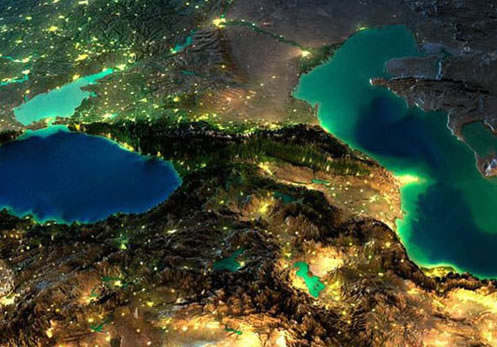 Georgia is a mountainous country. The Northern geographical boundaries run along the Great Caucasian Range, which includes the Main Caucasian Range, and its other chains stretch to the South. The Southern boundary coincides with the mountainous system of the Minor Caucasus, including the Meskheti - Trialeti volcanic plateau. Between the Great and Minor Caucasus plains are located. The Western part of the country is washed by the Black Sea.

Georgia is located in wrinkled Alpine zone, in Subtropical zones of northern periphery.
The geological constitution is characterized by the precipitation is basically of Mesozoic and Cainozoic era. According to the wrinkles it's divided by several Geotectonical units: from North to the South by Caucasian main ring's Antiklinorium, main Caucasian range, wrinkles system, Georgian Belt, Achara-Trialeti system, Artvin-Bolnisi Belt and Loc-Karabag's wrinkled zone.
Georgia differs by it's contrast relief. It is represented by high, middle and low mountain highland plane unity. The Caucasus are reflected sharply, inter mountain lowland.
The territory of the Georgia features a highly contrasting topography. The north of the country is occupied by the Greater Caucasus chain (highest point - Mt. Shkhara, 5068 m), which includes the Great Caucasian Range (the main watershed) and Gagra, Bzipi, Kodori, Svaneti, Egrisi, Racha, Lomisi, Kartli and other ranges. The inter mountain depression to the south of the Greater Caucasus encompasses the Kolkheti lowland, Inner Kartli, Lower Kartli and the Alazani Plain. Still further to the south the Minor Caucasian ranges rise to the medium height (Meskheti, Shavsheti and other ranges), reaching 2850 m. The southernmost area of the country is covered by the volcanic South Georgian Upland (Mt. Didi Abuli, 3301 m, its highest peak), dissected by specific canyon-like river gorges.
The Greater Caucasus and the South Georgian Upland join with the Likhi Range, which at the same time divides Georgia into two contrasting climatic zones: Western and Eastern Georgia.

The rivers of Georgia belong to the basins of the Black and Caspian Basin flows the Mtkvari river with its numerous tributaries (left) the Didi Liakhvi, the Aragvi, the Iori, the Alazani, (right) the Paravani, the Algeti, and Khrami. The Black Sea Basin rivers include the Rioni, the Enguri, the Acharistskali, the Bzipi and others. There are not many lakes in Georgia, the largest being Lake Paravani (37 sq. km), and Lake Paliastomi (17,3 sq. km), and the deepest Lake Ritsa (116 m) and Lake Amtkeli (72-122 m) (both are impounded lakes).

Soils: Spatial distribution of soils in Georgia is characterized by vertical variability.
On the Georgian territory there are almost all types of soil: