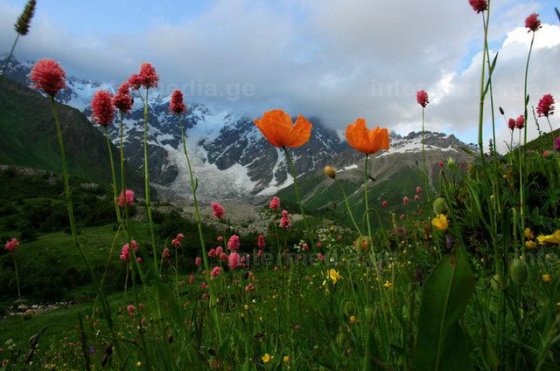 Georgia's natural environment is one of the most unique and varied in the world. Geologically it has more compressed into its surface than some continents. Remarkable for its landscape diversity, from mountains to desert, from snow to palm trees, Georgia ranks among the world's wonderlands. Within 67,000 square kilometres (about the size of Ireland) you can find 5000 metre peaks; glaciers, alpine meadows; sub-tropical coastline, high desert, semi-desert, fertile alluvial valleys, wetlands and of course huge swathes of virgin forest. Indeed nearly 40% of Georgia is still forest, a large proportion of which is still "virgin".

"     Not a single country in Europe possesses such a rich Flora and Fauna as Georgia."

To protect this natural resource 31 protected areas have been established and conservation measures enacted. Within these are five major National parks, all with extensive trail systems:

Georgia is like a magnificent landscape sandwich - its green fertile, alluvial lowlands set between the snowy Greater and Lower Caucasus mountains. This incredibly long and wide valley, is criss-crossed by hills, gorges, cliffs and rivers The Caucasus are geologically young mountains, only 25 million years old. They have the damp Black Sea winds blowing in from the west and the drier but still humid Caspian basin to the east. This gives the whole region plenty of rainfall, so erosion is strong. But still the mountains are growing, pushed up by the collision of tectonic plates below the surface.

Georgia's Wildlife is amazingly diverse, Bird watching is spectacular in its colour and variety, and the Flora is equally amazing with its pre Ice Age flowers found no where else. 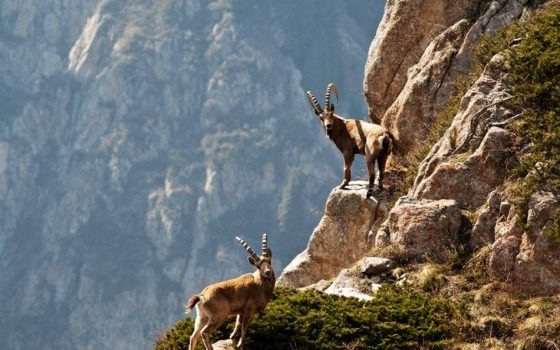 Due to its large areas of uninhabited forest, low levels of tourism and remote high alpine zones Georgia has preserved more species of animal than any country in Europe (save Russia, too huge to visit in a lifetime much less one trip)This includes a number of endemic species - of which perhaps the most notable is the Caucasian tur, a Related to the European Ibex it comes in two version, eastern and western. The western Capra Caucasica is unique for its splendid laterally curved horns - representations of which are found in ancient Colchean jewellery and pottery. Besides this Georgia has many animals now long departed from western Europe. It has brown bear, lynx, wild boar, bezoar goats, chamois, wolves, jackal, wild cats, a number of endemic butterflies, lizards, snakes and numerous tortoises. Recently the critically endangered Anatolian Leopard has been caught on remote cameras in the Vashlovani National park - although it has yet to be seen by naked eye.

The goitered gazelles can be found in eastern Georgia and around Tbilisi is the endangered dwarf shrew (if you can imagine any mammal quite that small). Two species of wild ox, both indigenous to the Caucasus, live in the alpine and semi alpine zones. Western Georgia is home to the mole, stone marten, horseshoe bat, hedgehog, grizzly bear, lynx, and the extraordinary Caucasian squirrel.

The Black Sea is home to both the common and the bottle-nosed dolphin as well as the porpoise, and fish there include beluga, ray, shark, sturgeon, black sea salmon, herring, dogfish, khamsa, flounder and swordfish. Needless to say, the fishing here is excellent, whether you like river trout or deep-sea expeditions. 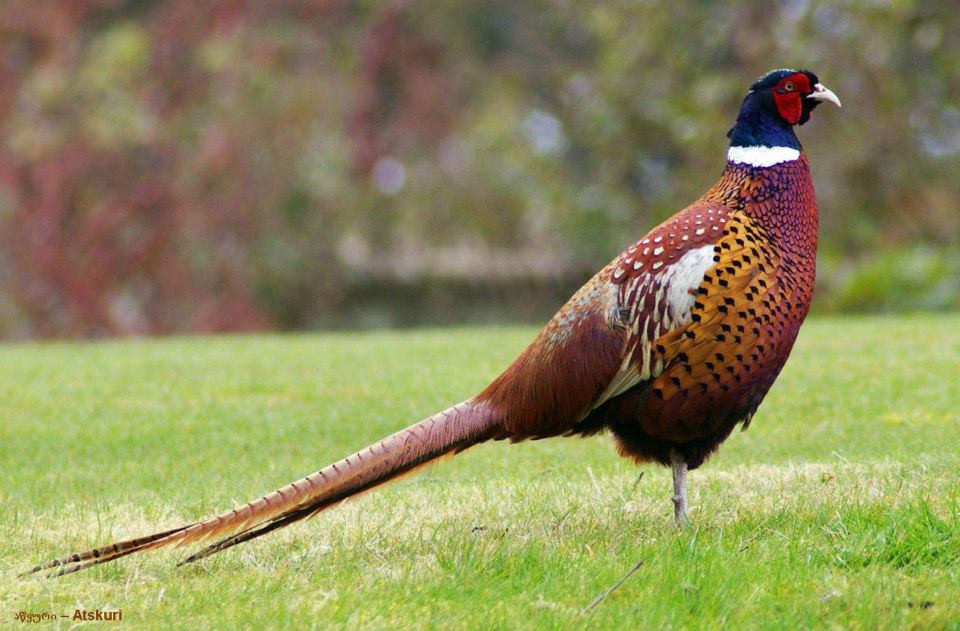 Georgia is, arguably, the bird-watching destinations of Europe. It has over 360 recorded species of bird including three endemics (found only here) - Caucasian Black Grouse; Caucasian Snowcock, Caucasian Chiffchaff (All of western Europe has but one). This is due to both our incredible landscape diversity and our key position among migratory corridors (once again we find ourselves as a crossroads).

The coast of the Black Sea and our high Caucasian passes are particularly rich in birdlife. As a result Georgia has four vultures and eleven eagles, Flamingos, Bee-eaters, Rosefinches, Black Redstarts, Wall Creepers and numerous kinds of shrike, warbler, finch only rarely found in the rest of Europe. During migrations pelicans, storks, herons, owls, orioles, cuckoos, swallows, hoopoes, martlets, kingfishers and nightingales can be seen.

It is often forgotten that the common pheasant found across Europe originates from our own Phasianus Colchicus, it is thought they were brought over by Greeks in the bronze age. Yet another export no one seems to remember.

Birding here is ever more popular and some of the best locations are not as remote or difficult to reach as you might think. However you appreciate what a little effort can result in you being able to reach fantastic viewing locations, such as looking straight down on an eagle's nest or living directly below a virtual ecosystem of migrating birdlife.

Stepantsminda - see all three of Georgia's endemic birds here as well as the vultures and many eagles and raptors.
David Gareji - a favourite haunt of the beautiful Egyptian Vulture, also many of the lower land finches, shrikes, warblers, larks 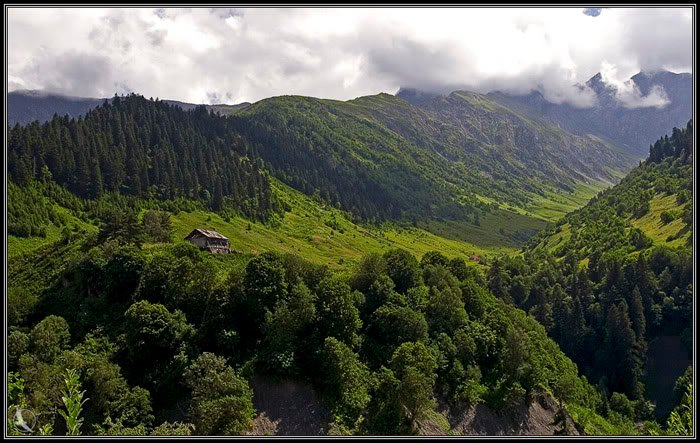 The Caucasus are famous for their botanical resource and many flowers and trees found in gardens across the world originated from our landscape. Georgia has between 4000 and 4500 species of vascular plant. Of these an estimated 15% are endemic to the Caucasus with about 300 species endemic to Georgia alone. One such is the dwarf Caucasian rhododendron with its beautiful white and yellow flowers only found high in the mountains. Another is the superb Iris Iberica that gives a white and violet flower every spring.

There is, unbelievably, 5,000 types of mushroom, 2,000 types of seaweed, nearly 600 types of moss, and 73 varieties of fern. Eastern and western Georgia are very different, the east being wet and quite warm and the west being dryer and a little cooler. In the wetlands you can find wingnut and alder trees and in slightly drier regions their can be found chestnut, willow, oak and hornbeam in quantity and in the far west is found wormwood, pistachio, maple and of course pomegranate.

Many flowers in Georgia were here from before the last ice and are found nowhere else, though evidence shows they were once common through all of Europe. In the spring and throughout the summer Georgia is a wonderland of pedals and no garden or meadow here is without them.

Based on: Department of Tourism and Resorts of Georgia and GCCW