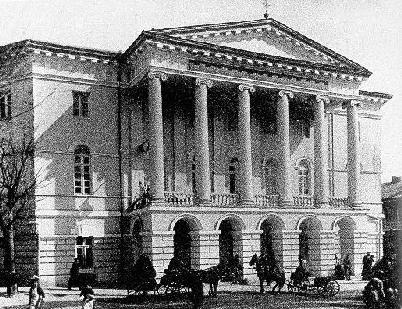 History of the Shalva Amiranashvili Museum of Fine Arts began in 1920 when a group of young artists founded the National Gallery of Art, which became its predecessor. The museum changed its name and building. And in 1950, finally moved to the building of a former seminary and received its present name. The museum was named after Shalva Amiarnashvili  in 1990, who for 30 years  held a great work to replenish the collection. Part of Georgian art exhibits have been returned from Europe, the other part was obtained from private collections.

The masterpieces of the various period( since  the medieval centuries  including the 20th century)   of the diverse masters are kept in  the museum , as well as the  historical materials of the BC period  can be spotted  in the museum.  About 900 exhibits are kept in the museum but the special place is devoted to the golden fund. This is one of the largest museums in the country, and its funds are more than 140 thousand of Georgian, Oriental and European art.

First of all, it is worth noting that the collection of plique-a-jour of the museum includes almost a third of all enamels in the world. Many of them dated from the X-XII centuries. Another interesting collection is samples of medieval coinage, dating from the VIII-XIII centuries. The most significant among them are the golden cup of the Georgian King Bagrat III and Queen Tamara Chest cross, inlaid with precious stones. Also, the Museum has ancient icon Anchiskhati, dated VI century.
The collection of fine art works is presented by the works of Repin, Surikov, Serov, Aivazovsky, Vasnetsov and other famous masters. Georgian painting in the museum is the primary, and covers the entire period of the artistic culture of the people. In addition, here is a collection of Persian miniatures and other Eastern countries.

E-mail: This email address is being protected from spambots. You need JavaScript enabled to view it.
Web-site: www.museum.ge
Date of establishment: 1920
Type (profile): Art Museum
Quantity of stored items: More than 38 900 items