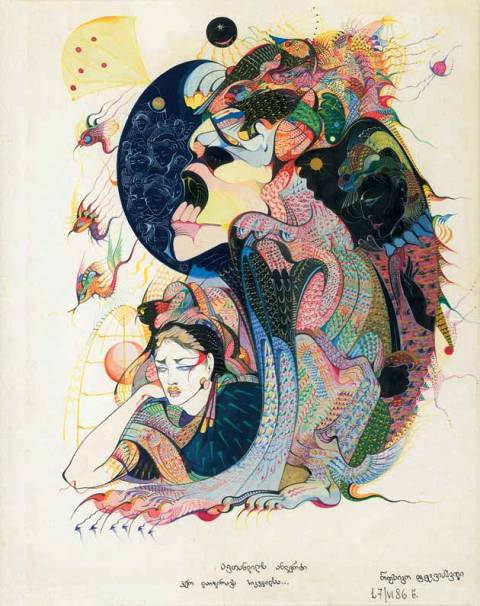 In antiquity the Georgian oral tradition was very strong. Ballads, songs, legends, and proverbs abounded. The legend of Amirani has come down to us through Apollonious Rhodius who makes reference to it in the third century BC. Folk poetry flourished in Georgia after the development of writing. The earliest epigraphic monuments that have survived date from the first half of the fifth century AD. These literary examples, however, are so highly developed that precursors cannot be doubted.

In the 470s Jacob Tsurtaveli wrote "The Martyrdom of Saint Shushanik", an original hagiographic work that demonstrates by its literary standards a pre-Christian writing tradition. Georgian literature over the next six centuries was exclusively religious in character, with writers primarily involved with translating biblical and scriptural texts into Georgian.
The twelfth century is the classical period of Georgian medieval literature. One of the first masterpieces of this period is "Amiran-Darejaniani", ascribed to Mose Khoneli, and adventure of derring-do and chivalrous acts that has its roots in the early folk tales surrounding Amirani. Much of this secular literature has similarities with the Moslem literature of the time. Tales written in Persian were recast in Georgian, most importantly "Shahnama" by Firdausi and Vis-o-Ramin by Gurgani, with a plot very similar to that of Tristan and Iseult.
Many of the best writers of the twelfth century belonged to the courts of the Georgian kings, notably Shota Rustaveli, the most celebrated figure of Georgian culture. His  work "The Knight in the Panther's Skin" is regarded as the national epic.

Mihaly Zichy's illustrations for "The Knight in the Panter's Skin. "

During the thirteenth century Giorgia was devastated by the Mongol invasions. With Tamerlane's death in 1405 the process of national renewal could begin, but it was not until the sixteenth century that a new literary spirit flowered. Patriotic in nature, the work of this period is marked by interpolations and sequels to the "Knight in the Panther's Skin". "The Omaniani", written at the beginning of the seventeenth century, follows the adventures of Tariel's grandson, Oman.
Georgian literature in the sixteenth century had renewed many of its ties with Moslem oriental verse. The major seventeenth-century poet and statesman, King Teimouraz I, was a great admirer of Persian poetry, having been brought up at the court of Shah Abbas I (1587-1629). he recast many Persian poems into Georgian. Despite his affection for the Persian Language, King Teimouraz suffered both personally and politically at the hands of the Persians. His long narrative poem, "The Martyrdom of Ketevan" is about his mother's torture at the hands of Shah Abbas.
In the first part of the eighteenth century, King Vakhtang VI (1675 - 1737) led Georgia's intellectual life. A monarch, scholar and poet, he collected and edited many historical works and codified a set of laws, "The Code of Vakhtang". he is responsible for setting up in 1709 the first press to print gooks in Georgian and his 1712 edition of "The Knight in the Panther's Skin" contains his extensive commentary.
Eastern Georgia was incorporated into Russia in 1801. The school of Georgian Romanticism that had been born in the exiled community Vakhtang VI found full expression at the beginning of the nineteenth century in the work of Alexander Chavchavadze (1786 - 1846), the son of Garsevan, the ambassador to Russia of King Herekle II. His verse expressed his deep disappointment at his country's loss of independence.
Grigol Orbeliani (1804 - 1883) was Chavchavadze's artistic brother, writing in the Georgian Romantic tradition, which addressed the need for the restoration of Georgia's independence through the efforts of patriots. the Romantic tradition reached its apogee with Nikoloz Baratashvili (1818 - 1845), who dreamed of liberty and independence for his motherland, while recognizing the futility of retreating into an idealized vision of past glories. he found solace in nature. "Twilight on Mtatsminda", and believed in selflessly serving his countrymen, "Meditation on the Mtkvari's Bank".
The end of the nineteenth, the beginning of the 20th century gave to the Georgian literature such prominent names as Akaki Tsereteli and Ilya Chavchavadze, the latter admitted to be the honour of Georgian literature and culture, who has played the greatest role in the political, social and cultural life of Georgia.
Twentieth-century innovation in literature came with the symbolist movement embraced by "the Blue Horns". In 1916 this group began publishing a magazine of the same name. Among the contributors were Paolo Yashvili, Titian Tabidze, Galaktion Tabidze, Kolau Nadiradze, and Valerian Gaprindashvili. Their radical experimentation thrived in the years of Georgia's independence between 1918 and 1921 but was suppressed in the years of Bolshevik domination.
The great Georgian novelist, Konstantine Gamsakhurdia (1891-1975), chose to explore Georgia's past through his historical novels. "The Hand of the Great Builder", "The Abduction of the Moon", and "David the Builder" are much loved and read throughout Georgia.