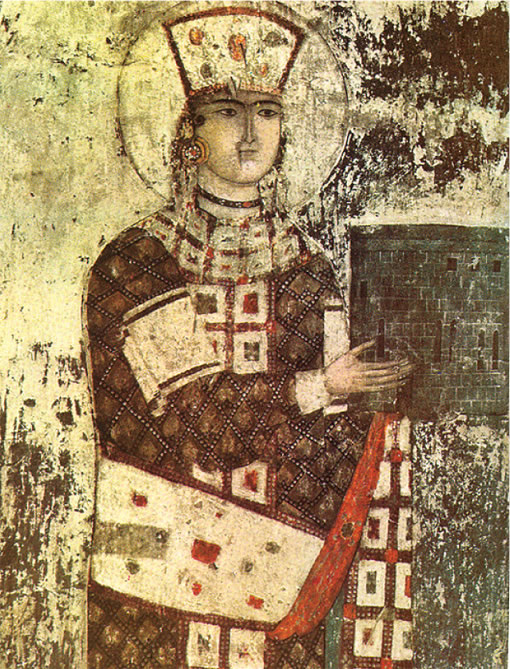 Tamar. The eldest daughter of King Giorgi III (1156–1184), Tamar was the queen of the Kingdom of Georgia since 1184. Her reign is usually acknowledged as the “Golden Age” in the history of Georgia.

She was made a co-regent in 1178 and succeeded her father six years later. However, her accession was not without difficulty. Powerful lords took advantage of the king’s death to reassert themselves. Tamar was forced to agree to a second coronation that emphasized the role of noble families in investing her with royal power. The nobility, led by mechurchletukhutsesi Qutlu Arslan, then demanded the establishment of the karavi, a political body with legislative and judicial power. Tamar’s refusal to satisfy this demand brought the Georgian monarchy to the verge of a civil war that was averted through negotiations. In the end, the royal authority was significantly limited and the responsibilities of the royal council, dominated by the nobles, was expanded. Nobles were also actively involved in choosing a husband for the young queen. On their decision, Queen Tamar married Russian Prince Yuri Bogolubsky, the son of Grand Duke Andrei Bogolyubsky of Suzdal in 1185 but the marriage was dissolved because of Prince Yuri’s debauchery and intrigues. Tamar later married Prince David Soslan, a member of the Ossetian branch of the Bagration dynasty, in 1189. From 1189–1191, Tamar’s former husband Yuri allied himself with certain Georgian nobles and organized two unsuccessful revolts.

Despite internal dissent, Georgia remained a powerful kingdom and enjoyed major successes in its foreign policy. In 1193–1194, the Georgian army occupied Bardav, Erzerum and other southwestern provinces. In 1195, a large Muslim coalition was crushed in the battle at Shamkhor, allowing Tamar to expand her sphere of influence into southeastern Caucasia. In July 1202, she achieved another triumphant victory when a massive coalition of Muslim states, led by the sultan of Rum, was crushed at Basian. The Georgians annexed Ani, Arran, and Dvin in 1201–1203, and in 1209, their armies captured the Emirate of Kars while the mighty Armen-Shahs, the emirs of Erzurum and Erzinjan, and the north Caucasian tribes became their vassals. Georgian influence also extended to the southern coast of the Black Sea, populated by a large Georgian-speaking population. The Empire of Trebizond, a Georgian vassal state, was established there in 1204 and soon became a major trading emporium, surviving for over 250 years. The Georgians then carried war into Azerbaijan and advanced as far as Ardabil and Tabriz in 1208 and went on to Qazvin and Khoy in northern Iran in 1210. The year of Tamar's death remains debated and some scholars argue in favor of 1207, others - 1210 and few indicate 1213. Her burial place remains unknown as well. She was succeeded on throne by her son Giorgi IV Lasha.

These victories brought Georgia to the peak of its power and glory, establishing a pan-Caucasian Georgian empire stretching from the Black Sea to the Caspian and from the Caucasus Mountains to Lake Van. The political and military development of Georgia was accompanied by an expansion of its religious and cultural presence throughout Asia Minor. Stability and strong central authority facilitated the growth of towns and the development of trade and crafts. Tamar’s reign also stimulated a renaissance of Georgian sciences and art. Numerous scholarly and literary works (Amiran-Darejaniani, Abdulmesia, Tamariani, and others) were produced while the art of illumination of manuscripts, miniature painting and goldsmith works reached their zeniths. Georgian monasteries, generously sponsored by the queen, flourished throughout the Holy Land and Asia Minor. Finally, Shota Rustaveli’s epic poem Vepkhistkaosani was dedicated to Tamar and remains the greatest cultural achievement of this age.