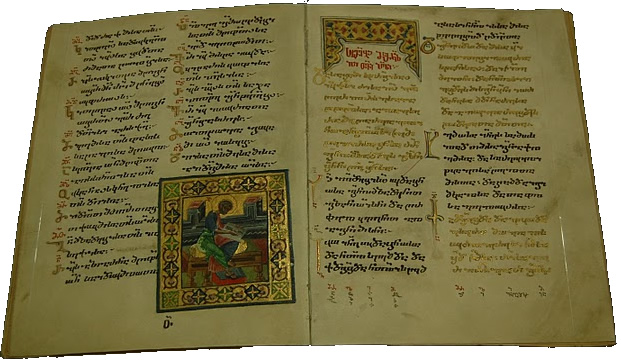 The wide variety of peoples inhabiting Georgia has meant a correspondingly rich array of active religions. The dominant religion is Christianity, and the Georgian Orthodox Church is by far the largest church. The conversion of the Georgians in A.D. 330 placed them among the first peoples to accept Christianity.

According to tradition, a holy slave woman, who became known as Saint Nino, cured Queen Nana of Iberia of an unknown illness, and King Marian III accepted Christianity when a second miracle occurred during a royal hunting trip. The Georgians' new faith, which replaced Greek pagan and Zoroastrian beliefs, was to place them permanently on the front line of conflict between the Islamic and Christian worlds. As was true elsewhere, the Christian church in Georgia was crucial to the development of a written language, and most of the earliest written works were religious texts. After Georgia was annexed by the Russian Empire, the Russian Orthodox Church took over the Georgian church in 1811.

The Georgian church regained its autonomy only when Russian rule ended in 1918. Neither the Georgian Menshevik government nor the Bolshevik regime that followed considered revitalization of the Georgian church an important goal, however. Soviet rule brought severe purges of the Georgian church hierarchy and constant repression of Orthodox worship. As elsewhere in the Soviet Union, many churches were destroyed or converted into secular buildings. This history of repression encouraged the incorporation of religious identity into the strong nationalist movement in twentieth-century Georgia and the quest of Georgians for religious expression outside the official, governmentcontrolled church. In the late 1960s and early 1970s, opposition leaders, especially Zviad Gamsakhurdia, criticized corruption in the church hierarchy. When Ilia II became the patriarch (catholicos) of the Georgian Orthodox Church in the late 1970s, he brought order and a new morality to church affairs, and Georgian Orthodoxy experienced a revival. In 1988 Moscow permitted the patriarch to begin consecrating and reopening closed churches, and a large-scale restoration process began. In 1993 some 65 percent of Georgians were Georgian Orthodox, 11 percent were Muslim, 10 percent Russian Orthodox, and 8 percent Armenian Apostolic.

Non-Orthodox religions traditionally have received tolerant treatment in Georgia. Jewish communities exist throughout the country, with major concentrations in the two largest cities, Tbilisi and Kutaisi. Azerbaijani groups have practiced Islam in Georgia for centuries, as have the Abkhazian and Ajarian groups concentrated in their respective autonomous republics. The Armenian Apostolic Church, whose doctrine differs in some ways from that of Georgian Orthodoxy, has autocephalous status.