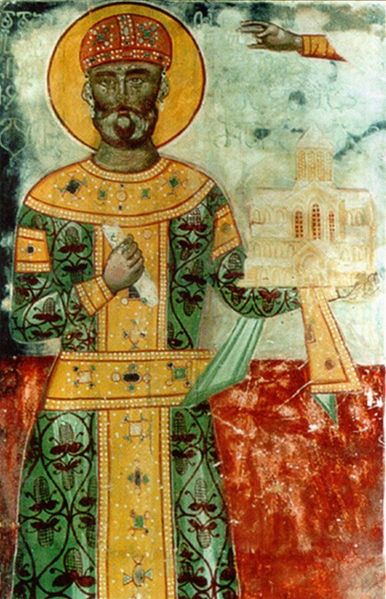 Medieval fresco with the portrait of David Aghmashenebeli holding a model of the Gelati MonasteryDAVID IV AGHMASHENEBELI (1073–1125). King of Georgia in 1089–1125, popularly considered as the greatest Georgian king; some historians refer to him as David II. Born into the family of King Giorgi II in Kutaisi.

David was raised during one of the darkest chapters of Georgian history, amidst the strife of the so-called Great Turkish Onslaught (didi turkoba) when the Seljuk tribes began massive migrations to the southern Caucasus. King Giorgi II was unable to cope with the problem, and in a bloodless coup in 1089, he was forced to resign in favor of his son. Between 1089–1100, King David organized small detachments of his loyal troops to restore order and destroy isolated enemy troops. He began the resettlement of devastated regions and helped to revive major cities. Encouraged by his success, but more importantly the beginning of the Crusades in Palestine, he ceased payment of the annual contribution to the Seljuks and put an end to their seasonal migration to Georgia. In 1101, King David captured the fortress of Zedazeni, a strategic point in his struggle for Kakheti and Hereti, and within the next three years he liberated most of eastern Georgia.

A late 19th century portrait of King David IV Aghmashenebeli In 1103, King David convened the Ruis-Urbnisi Church Council that reformed the Georgian Orthodox Church, limiting its authority, expelling rebellious clergy, and expanding the royal oversight into clerical sphere. The office of the powerful Archbishop of Chqondidi was merged with that of Mtsignobartukhutsesi, chief adviser to the king on all state issues. The new office introduced direct royal authority over the church, supervised the new court system (saajo kari), and directed the police apparatus that spread royal authority throughout the kingdom. The king facilitated the construction of monasteries and churches in Georgia, Greece, Bulgaria, and Palestine. His most beloved project was the establishment of the Gelati Monastery and Academy in 1106, where he often personally labored on construction. Gelati, however, was not completed until after his death but eventually became a major educational and cultural center.

In 1105, the Seljuks mobilized a large coalition against King David but were routed at Ertsukhi. Over the next 15 years, King David pursued an aggressive expansion throughout southern Transcaucasia, capturing the key fortresses of Samshvilde, Dzerna, Rustavi, Kaladzori, Lore, and others. A number of Seljuk invasions between 1110 and 1116 were defeated. From 1118 to 1120, King David launched a major military reform, which sought to reduce the king's dependence on the troops supplied by feudal lords and increase the royal authority. Married to the daughter of the chief of the powerful Cuman-Qipcaq tribe residing in the northern Caucasus, David invited entire tribe, which was engaged in a bitter war with the rising Russian principalities, to resettle to Georgia in 1118.

David’s decision had long-lasting consequences. Georgia was lacking in manpower as a consequence of the devastation wrought by the Seljuk incursions. Royal authority was beset by a troublesome nobility jealous of its privileges and apprehensive of an increasingly strong central government. Thus, the Qipcaqs would provide the crown with a force that would be loyal to it alone, free of any connections with other vested interests in Georgia. Certainly, the decision to resettle and use a foreign warlike tribe was a daring move, which could have had disastrous effects on Georgia, but it proved successful. Some 40,000 Qipcaq families (approximately 200,000 people) moved from the steppes of the northern Caucasus to central and eastern Georgia. To accelerate their assimilation into the Georgian population, they were dispersed over a number of places while retaining their clan structure. They were outfitted by the crown and were granted lands to settle. In turn, the Qipcaqs provided one soldier per family, allowing King David to establish a 40,000-man standing army in addition to his royal troops. According to the Georgian royal annals, Kartlis Tskhovreba, King David’s policy proved to be very successful as the Qipcaqs soon converted to Christianity and adopted the Georgian way of life. The new army provided the crown with much of the necessary force to fight both external threats and internal discontent of the powerful lords. 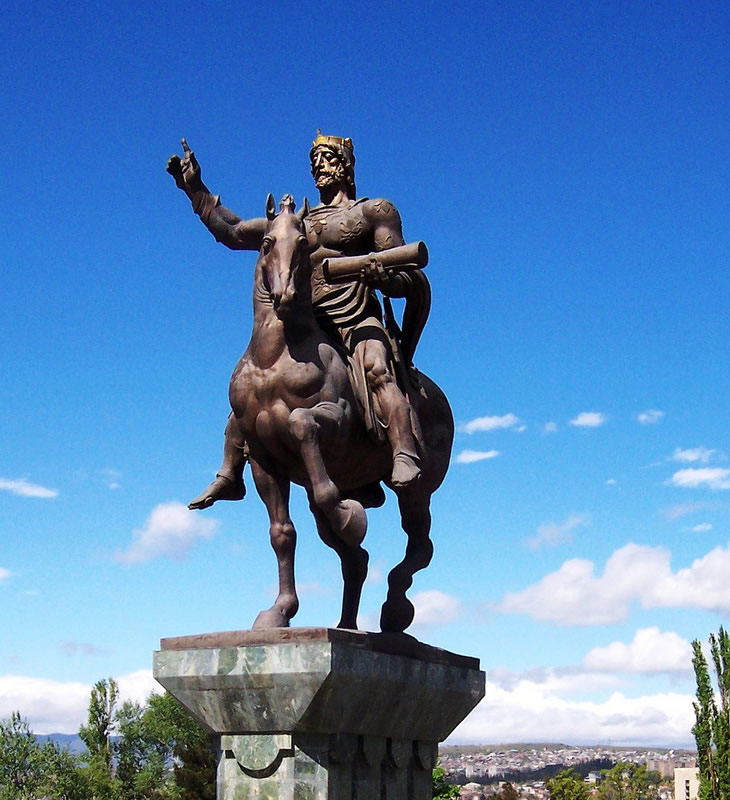 The Qipcaqs were immediately put to use. In 1120, King David twice invaded and defeated Shirwan, then captured the fortresses of Kabala, Kurdevan, Lizan, and Khishtalant. In 1121, while the king was isolated by heavy snow in western Georgia, the Seljuks invaded eastern Georgian provinces but David rallied his forces and the local population to clear the snow-covered road across the Surami (Likhi) Mountains and defeat the invading forces. The Georgian king soon asserted his authority over almost the entire southern Caucasia, except for Tbilisi. He established contact with the Crusaders in the Holy Land, and there is evidence that the two factions tried to coordinate their actions against the Muslims.

Muslim powers became increasingly concerned about the rapid rise of a Christian state in southern Caucasia. In 1121, Sultan Mahmud b. Muhammad (1118–1131) declared a holy war on Georgia and rallied a large coalition of Muslim states led by the Artuqid Najm al-din El-ğazi and Toğrul b. Muhammad. The size of the Muslim army is still a matter of debate with numbers ranging from fantastic 600,000 men (Walter the Chancellor’s Bella Antiochena, Matthew of Edessa) to 400,000 (Smbat Sparapet’s Chronicle) to modern Georgian estimates of 100,000–250,000 men. Although all these numbers are exaggerated, all sources agree that the Muslim powers gathered an army that was much larger than the Georgian force of 56,000 men. However, on 12 August 1121, King David routed the enemy army on the fields of Didgori, achieving what is often considered the greatest military success in Georgian history. The victory at Didgori signaled the emergence of Georgia as a great military power and shifted the regional balance in favor of Georgian cultural and political supremacy. 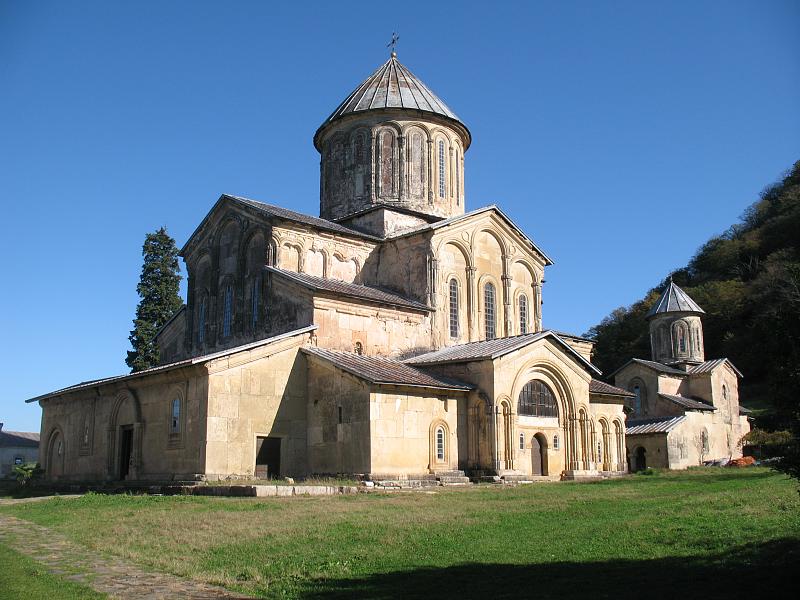 Following his success, King David captured Tbilisi, the last Muslim enclave remaining from the Arab occupation, in 1122 and moved the Georgian capital here. A well-educated man, he preached tolerance and acceptance of other religions, abrogated taxes and services for the Muslims and Jews, and protected the Sufis and Muslim scholars. In 1123–1124, King David’s armies were victorious in the neighboring territories of Armenia, Shirwan, and northern Caucasus, further expanding Georgia’s sphere of influence. By the time of King David’s death on 24 January 1125, Georgia had become one of the most powerful states in all of the Near East.

Upon his death, King David was, as he had ordered, buried under the stone inside the main gatehouse of the Gelati Monastery so that anyone coming to his beloved Gelati Academy stepped on his tomb first, a humble gesture for a great man. Among David's children, the eldest son Demetre succeeded him and continued his father's victorious reign; daughter Tamar was married to the Shirwan Shah Akhsitan (Aghsartan in Georgian), while another daughter, Kata (Katai), was married to Alexios, the son of Byzantine statesman Nicephorus Bryennius. Beside his political and military skills, King David earned fame as a writer, composing Galobani sinanulisani (Hymns of Repentence, c. 1120), a powerful work of emotional free-verse psalms, which reveal the king’s humility and religious zeal.