IMERETI the Inseparable Part of Georgia

IMERETI
the Inseparable Part of Georgia 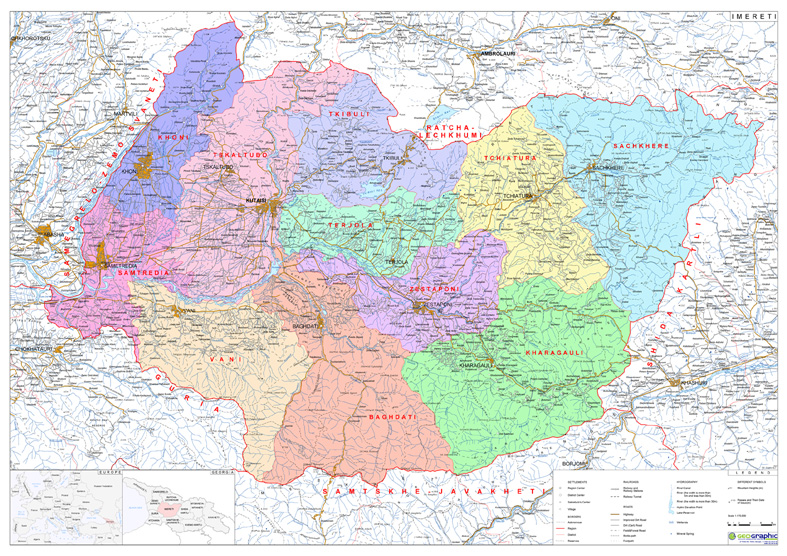 Georgia, a country located on the threshold of Europe and Asia, of Christian and Islamic worlds, the Caucasus – one ancient country located in the unique region of the Black Sea basin, is schematically divided into two parts: east and west Georgia. Their historical names are Kartli or Iberia (later called – Iveria) – east Georgia and Egrisi or Colcheti – west Georgia.


As Vakhushti Bagrationi, great Georgian historian and geographer of the XVIII century mentioned, starting from ancient times, Georgia was known under three names: “first name - Egrisi, second name - Abkhazeti, third name – Imereti”. All these three names are synonyms and in different historical epochs they denoted one and the same Georgian country (west Georgia). The name “Imereti” with its present, i.e. with comparatively narrow meaning was adopted later. This process started in the 60s of the XIII century and mainly finished by the end of the XV century, when the United Georgian Kingdom finally separated, resulting in the formation of a new political unification in west Georgia – Imereti Kingdom (1489-1810).
Present historical-geographic region of Imereti was formed with the gradual merging of two ancient Georgian “countries”. These units were “Kutatisi Country” (“Shida Egrisi”, “Samokalako”) or further called Kvemo Imereti, and “Argveti” or present Zemo Imereti. Historically and naturally, Racha-Lechkhumi was closely connected with Imereti. Thus, for many, centuries Imereti (with both broad and comparatively narrow understanding) represented the inseparable part of all of Georgia, one of the leading historical and unifying national centers of this large ethno-cultural world.
Today Imereti is one of the strongest regions of Georgia. The region includes 12 territorial units, which consist of towns and regions. It includes town Kutaisi, and Baghdati, Vani, Zestafoni, Terjola, Samtredia, Sachkhere, Tkibuli, Kharagauli, Khoni, Tskaltubo, and Chiatura regions.

Possibilities of Reviving and Development of Traditional Fields of Economics:
Formation and development of the Imereti industrial-territorial system are stipulated with the following economical factors:
1.       Raw Material base - Imereti territorial unit is rich with the natural-and-resource potential (partially already mentioned above). According to the projections of known supplies, some of them (manganese, coal) are of worldwide importance and demand on the international market is only increasing.
2.       Strong Power Potential – In Imereti there are very advantageous natural conditions that allow  the generation of electric power, without which it is impossible to further develop the industrial sector. Currently there are 5 strong hydro-power stations operating in the region: RioniHES and GumatiHES in Kutaisi, VartsikheHES – in Tskaltubo region territory, DzevrulaHES – in Terjola and ShaoriHES – in Tkibuli regions.
3.       Provision of Human Resources – Imereti covers the part of western Georgia that has a large population. Even back in the period when large-scale industry started, the man power that was required to meet the needs of industry was available. During tens of years a very experienced and highly qualified professional base was formed in Imereti. However, the chronic unemployment that has resulted in the wake of the collapse of the Soviet Union has greatly impacted the economy and this may destroy this advantage of the region as locals seek employment opportunities abroad.
4.       Proximity to the Consumers’ Market – One of the more advantageous aspects may be the fact that the region is located in the area with a high population. High concentration of people means a significant volume of consumption. This created profitable conditions for cultivating the fields growing crops and processing foodstuffs, and selling light and widely-used commodities in the local market. The difficulties occurring in the industrial sector and human migration is slowly taking its toll on the local market.
5.       Profitable Geographic Location – In this respect the most important is the function of transportation. Imereti is closely located to the Black Sea port of Poti, has an airport (Kopitnari), and is crossed by the main east-west railroad and the international motorway.

Possibilities of Developing Resort Facilities and Tourism on the basis of Recreation (Resting and Medical) Resources:
The geographical location of Imereti, its landscape, historical-cultural and natural monuments, agriculture, rich national traditions, especially Imeretian hospitality, represent good preconditions for the development of tourism in the region. The region is home to more than 250 historical monuments, which may create clear imagination for the guests about the rich and unique Georgian culture and history. From the Antique Epoch until the beginning of the XX century their location in wonderful landscapes greatly impressed visitors from all over the world.
In Imereti adventure tourism is developed. The mountain and forest massifs of Imereti covering 250,000 hectares allow developing these spheres of tourism in this region, which include: mountain climbing and horseback riding, speleo-tourism, rafting on the Rioni River, Eco-tourism, which have unlimited possibilities for development in Imereti. A new meaning has obtained agro-tourism – more than 200 peasant farmers of Imereti are interested in this sphere of tourism. New perspectives have obtained hunting and fishing tourism in the face of Sachkhere new hunting farm. We should mention separately Georgian traditions, wine and cuisine tourism. Imereti Tourism Office “Imertour” considers popularization of Georgian traditions and folklore as its strategic principle. In this respect a service program is drafted to become acquainted with rich folk traditions and folklore of Imereti, as well as those of Racha, Lechkhumi, Svaneti, and Samegrelo Regions.
The activities carried out in Georgia for developing and popularization of tourism significantly helped to increase the number of organized and non-organized tourists traveling both by auto-transport and by foot. The number of people in cycling in the region has been especially increased, which leads to believe that cycling represents one of the popular kinds of sports on domestic and international markets.
One of the priority principles of Imereti tourist product represents protected territories, national parks, health resorts and rehabilitation zones. In this respect may be named Sataplia and the Borjomi-Kharagauli National Parks with 75 thousand hectares of area. The landscape of the region, medicinal mineral waters make the balneological resorts attractive for holiday-makers. Currently, there are 53 health resorts and rest houses in the region. Each of them has perspective to become popular on the world tourist market if management and marketing is performed properly, and existing infrastructure is renovated.

Health Resorts and Rest Zones
Imereti health resorts and rest zones, which were built and arranged in the Soviet period, was designated for cheap, low level comfort and service infrastructure, and it is obvious that today most of them are unable to meet the demands of the modern market. As a result, unique medical mineral waters, climate, and beautiful nature allow us to draft new programs and proposals considering modern demands on their re-building.

Medical Grottos and Caves
Imereti is rich with grottos and caves, which include the Sataplia, the Navenakhevi, the Tsutskhvati, the Tsinabereti, the Tskaltubo, the Kumistavi, the Tetra, and the Dzevri Caves. Geographically, they are located close to Kutaisi. Many have already been studied but there are others that have yet to be discovered. The micro-climate and stable temperature within these caves are highly beneficial in the treatment of bronchial asthma, hypertonic and hypotonic diseases. Among the above-mentioned caves the Sataplia, the Navenakhevi and the caves located on the territory of DzevrulaHES (in the village of Dzevri) are well arranged.
Thus, Imereti and western Georgia, the territory of which is rich with studied and not-studied caves, requires more research to be carried out in order to further understand the potential for medical tourism. The region has all the condition and resources necessary for becoming one of the serious medical centers of the world.

Lakes, Reserves and National Parks
Imereti region has rich flora and fauna. The massifs of forest cover 250,000 hectares of the Imereti region territory. The forests beautifully merge and cover the mountainous landscapes. Ecological cleanness and wild, untouched nature is very attractive for travelers. Such zones include the nature of Sataplia, Ajameti, Mukhnari, Vani, Khoni, Chiatura, and Baghdati, and especially the Borjomi-Kharaguli National Park, which covers 24,000 hectares of Imereti territory and which is rich with flora and fauna. Tourism and rest zones include territories, where today Tkibuli, Shaori and RioniHES water reservoirs are located. In addition to large lakes, there are many natural lakes that are situated 1000m and 1500m above sea level and each of them give great opportunity to create new suitable tourist infrastructure at the places of their location.

****
The history of Imereti like other corners of Georgia is rich with multi-century pages of battle, labor and cultural development. The history of Imereti was created not only by the kings and other noblemen but also clever, laborious and quick-witted simple people. They built in all the corners of Imereti many castles and towers, churches and bridges, created jewelry, enameled items, and polyphonic chants, painted frescos, and wrote books. History has preserved the names of many great Georgian figures living and working on the territory of Imereti. Many outstanding contemporary representatives of science, culture, and sports were born in this region.

At present Imereti population makes up 1/6 of the population of whole Georgia. Despite the heavy toll migration has taken beginning in the 1990s after the political-economic crises, Imereti still maintained great human resources in the face of high intellectual and laborious population.

Since 2003, i.e. after the “Rose Revolution” took place in the country, important economic changes have been started, particularly: rehabilitation of some leading enterprises, developing modern infrastructures for small business firms and tourism, formation of farms equipped with modern mechanization, arranging roads, carrying out complete reconstruction of Kopitnari Airport for international flights, replacing soviet buildings with modern constructions and arrangements, moving several state structures from the capital of Georgia to Kutaisi, and other activities.

The detailed information about Imereti may be read on the pages of this encyclopedia.