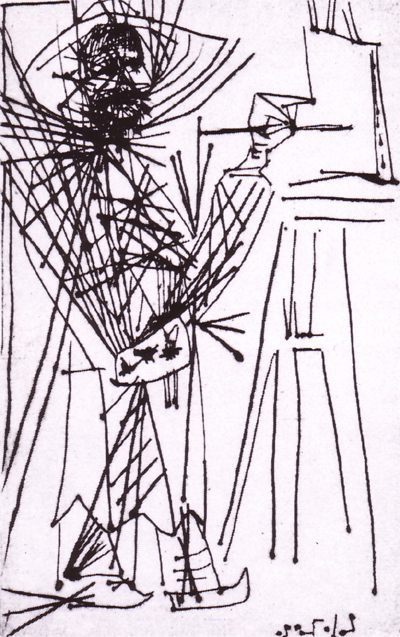 Pirosmani Picaso 1972Niko Pirosmanashvili also known as Niko Pirosmani (1862-1918) was born in 1862 in Kakheti, in the small village of Mirzaani to peasant parents. They had died when he was very young, and his sisters took him to Tbilisi, where they have become servants. When Niko’s elder sister died, he and his younger sister had to go back to their native village. Niko worked as a shepherd and his sister had kept house.

He has taught himself to read. To paint he has also taught himself. His thirst for knowledge has made him leave his village and return to Tbilisi. But insecurity and the necessity to earn his living by hard manual labor prevented him from going ahead with his self-education. He has worked on railways for some time, but later had to give this up because of his poor health. For a while he ran adairy shop, but like all his other business undertakings, it has failed. Even when he was a small boy, paintings had fascinated him. He loved watching sign-painters painting signboards and murals for tavern and inns. He has taught himself to paint signboards, found clients and together with a painter, G.Zaziashvili, opened a painting business (1882). But he was a poor businessman and was soon forced to close the shop.

As a traveling artist, with brushes and paints he wandered from tavern to tavern, from one inn to another, painting his pictures and signboards on oil-cloth, cardboard, tin-plate or any material he could get hold of, and sometimes painting murals. Pirosmanashvili was proud, he never complained, never turned to anybody for help, though all his life he has lived in poverty.

In 1912 the poet Ilya Zdanevich and two students of the Academy of Arts Kirill Zdanevich, brother of the poet, and Mikhail Le Dantiu became interested in the works of Pirosmanashvili and started collecting his paintings. M.Larionov included Pirosmani's works in the exhibition “Target” of the Jack of Diamond group (1913). Ilya Zdanevich’s published newspaper articles, diary notes (which he published in Paris) and organized exhibitions in Moscow, St.Petersburg and Paris. But Pirosmanashvili himself never moved from Georgia.

Gradually the public began to show real interest in Pirosmani’s art. The manager of the Georgian National Gallery has collected in a short time the main paintings of this remarkable artist, and they are presented in the collection of the State Museum of Fine Arts of the Georgia. The Museum possesses almost all of Pirosmani’s works, except for the few paintings in private collections.

The Society of Georgian Painters founded in 1916 invited Pirosmanashvili to attend one of it first meetings. Its members showed interest in Pirosmani as a person and in his paintings. His portrait and articles devoted to him appeared in a Georgian newspaper. The Society instructed a painter Lado Gudiashvili to help Pirosmani out of his financial difficulties. Once the artist has come to a meeting, but unfortunately he did not get along with the Society. And the reason was that the same newspaper which had published a favorable article about the work of Pirosmani, has also published a cartoon of him. Later he always avoided meeting painters.

The artist died as he lived, impoverished, lonely and unwanted, on May 1918. His burial place is unknown.