Real Georgian wedding is a beautiful, entertaining and rich holiday with observance of all original customs of Georgian people. The first rule of Georgian wedding is abundance of invited guests. Sometimes the number of guests reaches several hundreds. By the way, it is impossible to refuse to come to a wedding since it is a big insult for the inviting party; sometimes a long-term enmity of two families might begin for this reason.

Family creation in Georgia has three stages: machankloba — marriage proposal, nishnoba — betrothal and kortsili - wedding. Although today parents frequently do not participate in the choice of the bride or the groom for their children as it used to be, the family role remains very high. Marriage should be necessarily approved by relatives. Both families are very responsible in taking this step and try to find out as much as possible about their potential relatives. Only then they give consent to marriage proposal. When all formalities are observed there comes time for betrothal ceremony.

According to beautiful custom the groom during the bride's entering their future house should climb on the roof and free a white bird. Then the newlyweds are offered a wedding glass of wine. The first to drink is the groom who then puts the wedding ring in wine and passes the glass to the bride who also drinks from a glass Afterwards the groom gets the ring out of the glass and officially hands it over to his chosen one saying words of devotion and love. 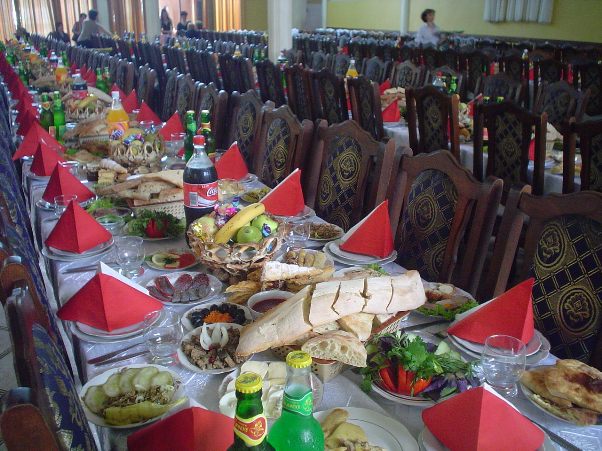 Then follows the solemn "survey" of the groom's house by the bride as the future mistress. Accompanied by witnesses and guests the groom and the bride break a beautiful plate for luck before entering the house. In order to make new home prosperous they throw grains of cereals to the house corners and give the newlyweds wooden ornaments – “chiragdani” which mean “the life tree”. During her walk around the house the bride should touch a cauldron which is a symbol of home and go round a pot with oil or wheat three times.

Georgian weddings are very cheerful and noisy. Tamada will urge anyone to tell the toast. The first toast is to the groom and the bride, peace and prosperity in their home, cheerful children's voices.

The most romantic and beautiful wedding ritual (generally accepted in Caucasus ) is the abduction of the bride. Now abduction is formal and happens only with the consent of the bride and her parents. Often it happens to avoid the expenses connected with the organization of magnificent and rich Georgian wedding. Not every family can afford traditional national wedding in conformity with the customs of their ancestors. The abduction of the bride makes it possible to arrange a modest feast only for close relatives. After that the marriage is considered effected. There is always a chance to organize the proper wedding in the future.

The basic expenses related to wedding organization are borne by the family of the groom. The financial position of the bride has no special value. Her main assets are modesty, chastity, piety, thrift, good temper. Girls in Georgia are brought up in traditions of chastity. A man is the breadwinner in a Georgian family, its supporter and physical protector; a woman - spiritual force, keeper and teacher of ethical traditions.