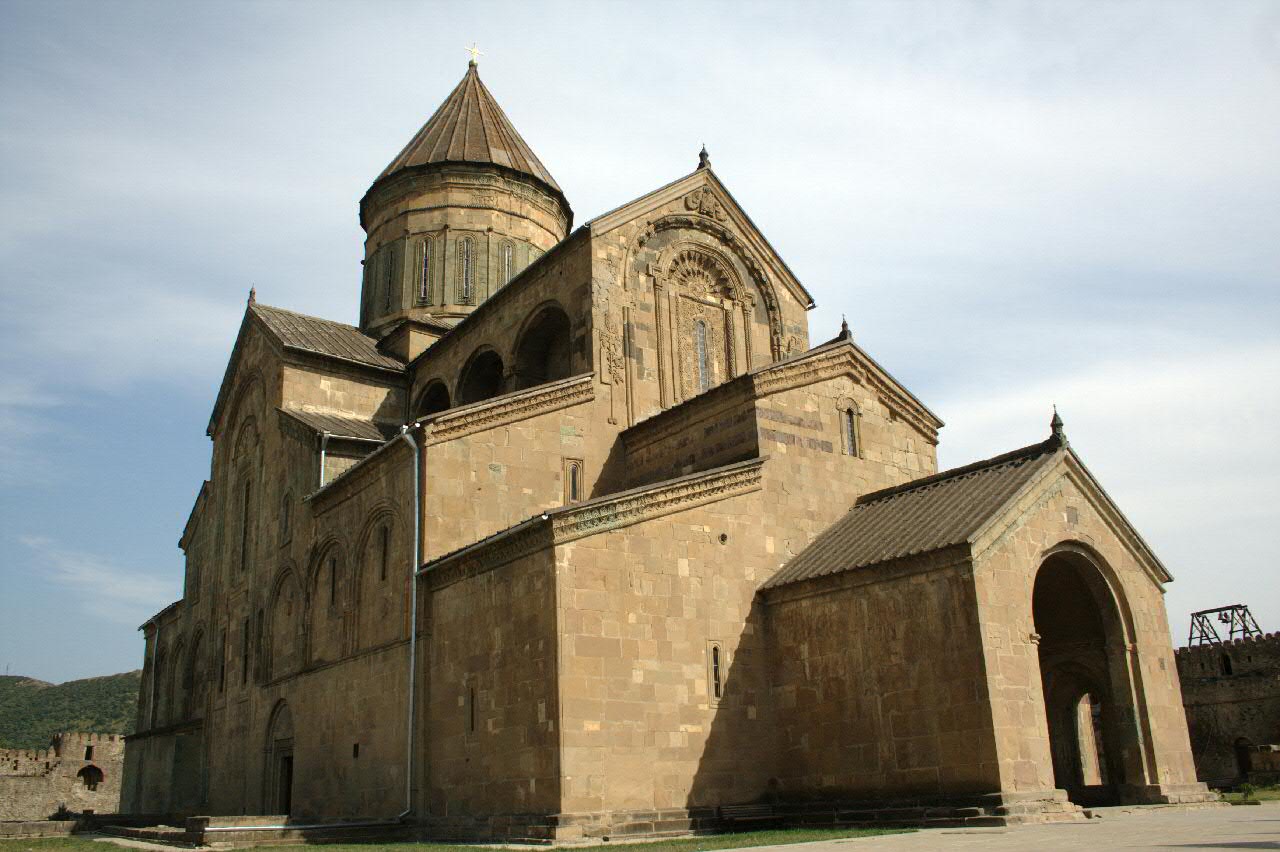 Svetitskhoveli Cathedral - the most important religious centre and the biggest ecclesiastic construction of mediaeval Georgia, was built in 1010-1029 under the leadership of the Catholicos Patriarch Melkisedec by an architect named Arsukidze.

In the IV century here was a wooden church. In the 480s a big three-aisled basilica was built on its place. The fragments of these earlier churches are still preserved.
Svetitskhoveli Cathedral represents “inscribed cross” type church with elongated West arm. During the centuries it underwent several restorations. In 1413-1440 king Aleksandre the Great restored the Western part of the cathedral and the collapsed cupola. 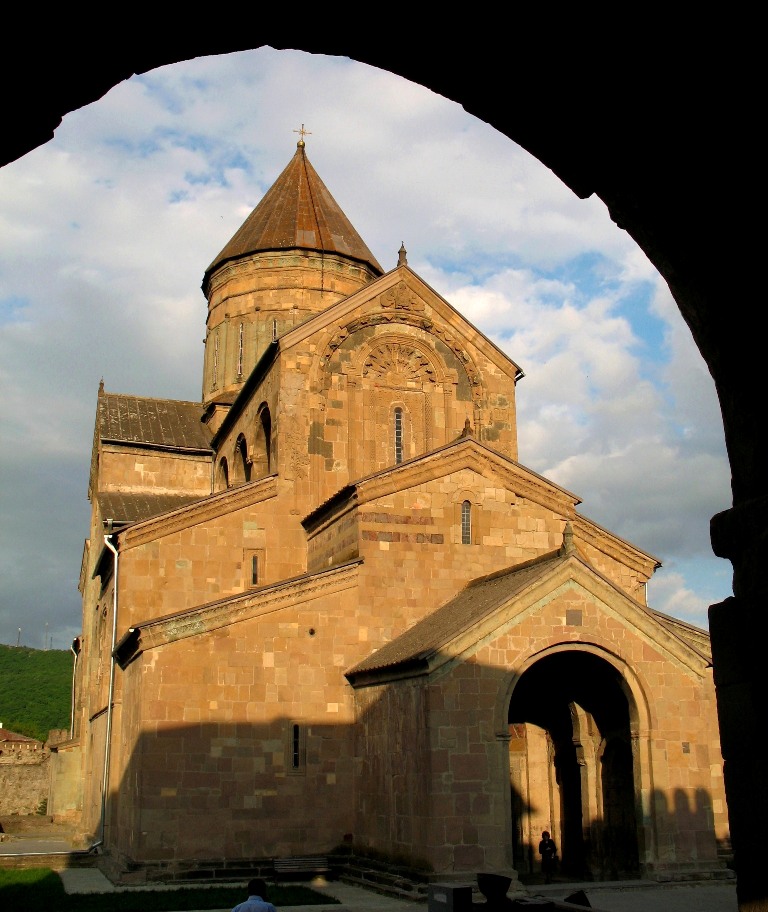 In XV century a small square domed chapel was built in the interior of the Cathedral which represented symbolic replica of the Holy Sepulcher in Jerusalem.
Svetitskhoveli had porches and apses of different periods from the South and North, which were destroyed in 1837. The preserved mural paintings mostly date to XVII century.

The walls surrounding the courtyard of the Cathedral belong to the second half of XVIII century. On the West there is the XI century gate and fragments of the palace of Catholicos Patriarch Melkisedec.
Some of the Georgian kings (among them the last kings of Georgia Erekle II and Giorgi XII), Patriarchs (Melkisedec I, Domenti II) and Georgian nobles are buried in the Cathedral. 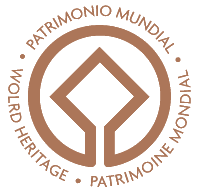 Svetitskhoveli Cathedral, together with other historical monuments of Mtskheta has been inscribed upon the World Heritage List of the Convention concerning the Protection of the World Cultural and Natural Heritage since 1994. Inscription on this list confirms the outstanding universal value of a cultural or natural property which deserves protection for the benefit of all humanity.

The group of churches at Mtskheta, outstanding examples of medieval ecclesiastical architecture in the Caucasus region, testify to the high level of art and culture in the vanished Kingdom of Georgia, which played an outstanding role in the medieval history of its region.

The strategic location of Mtskheta at the crossing of ancient trade routes and the confluence of the Aragvi and Mtkvari rivers, its mild climate, and its fertile soil contributed to early human settlement in the area (3000-2000 BC). With the collapse of the empire of Alexander the Great the east Georgian kingdom of Kartli-Iberia came into being with its capital at Mtskheta, which at this time straddled both banks of the river and was divided into several quarters. The Armaz-tsikhe (citadel and royal residence) was at the heart of the city and fortified quarters allocated to specialized trades clustered around it, making up 'Great Mtskheta'.

The city was destroyed by Pompey the Great after his defeat of Mithridates the Great of Pontus in 65 BC. In the 1st and 2nd centuries AD, Iberia played an important role in the politics of the region. Christianity was brought to Mtskheta in the 4th century by St Nino, and became the official state religion in 334. The first wooden church was built in the palace garden, where the Svetitskhoveli church now stands. Although the capital of Kartli was transferred to Tbilisi by Prince Dachi in the 6th century, Mtskheta retained a prominent role as the religious centre of the country and the seat of the Katolicos (later elevated to Patriarch).

When Georgia became part of Russia in 1801 Mtskheta was no more than a village in the Dusheti district; however, its economic situation was improved when the Poti-Tbilisi railway was built in 1872.

The citadel (Armaz-tsikhe) of Great Mtskheta is located on the side of Bagineti mountain on the right bank of the river Mtkvari. The Hall of Columns, located on the lower internal terrace, is rectangular and contains an axial row of six columns. Other ruins from this period include a temple on the top of Bagineti mountain and an impressive barrel-vaulted tomb. Excavations in the Armaziskhevi valley have revealed many burials and structures from as early as the Neolithic, including a bath-house and fragmentary remains of what must have been a sumptuous palace in proto-Hellenistic style. Of special interest are the above-ground mortuary houses of the 1st century AD onwards.

The coming of Christianity resulted in intensive building activity to meet the requirements of the new religion, and many of these monuments have survived to the present day. The Svetitskhoveli complex in the centre of the town includes the 11th century cathedral, the palace and gates of the Katolikos Melchizedek from the same period, and the 18th-century gates of Irkali II. The cathedral is domed and cruciform in plan. The interior was originally covered with wall paintings, but these were whitewashed over and only recently have fragments of them been revealed again. The facades are ornamented with decorative arcading which unites the separate components of the structure. Severely damaged by Tamurlaine, it was rebuilt in the 15th century; more serious alterations took place in the 1830s on the occasion of a visit to the Caucasus by Tsar Nicholas II, when richly ornamented galleries and subsidiary chapels were ruthlessly swept away.

Opposite Svetitskhoveli on the top of the hill on the left bank of the Aragvi river is the Mtskhetis Jvari (Church of the Holy Rood), the most sacred place in Georgia, where a cross was erected by St Nino to replace heathen idols. The complex contains several buildings from different periods. The cruciform church, with porticos to north and south, dates from the mid-6th century. By the end of the century it was adjudged to be too small and so a new church (also cruciform, but much larger) was built on the site of the cross itself. The third important monument of Mtskheta is Samtavro (the Place of the Ruler) in the northern part of the town, where legend has it that St Nino lived. A small domed church was built in the 4th century and survives in a much-restored condition. The main church of Samtavro, built in the early 11th century, is cruciform and domed. The graves of Mirian, the Georgian king who adopted Christianity, and his wife are in the north-west comer of the church. In addition to these two churches, there is also a 16th-century two-storey bell tower and a number of monastic structures at Samtavro.