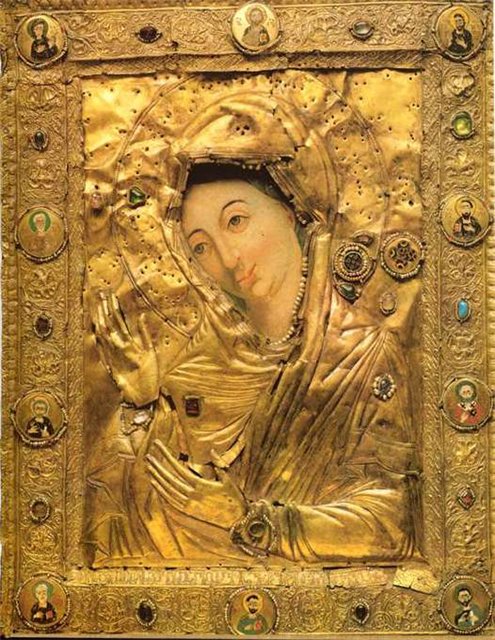 Only the Georgian artistic achievements in metalwork can be compared to those of architecture during the Middle Ages. The craft has an illustrious pedigree in the Caucasus that goes back to the third millennium BC. From the barrow graves in Trialeti we already know that the ancestors of the Georgian were accomplished in smelting, forging, soldering, stamping, and embossing articles of the greatest delicacy as early as the Bronze Age (from the second millennium to the beginning of the first millennium BC).

The numerous bronze belt buckles of fantastic animals that have come down to us from the second half of the first millennium BC provide fascinating links with the animal forms later associated with Scythian art. Examples of Georgian jewelry from the fourth and fifth centuries BC attest to the high technical and aesthetic standards; granulation, embossing, and delicate filigree work created earrings, rings, and pendants equal to anything produced in the antique world. The niello, gold, and sometimes silver icons, crosses, jewelry, and book covers that date from the eighth and ninth centuries are among the earliest examples of the medieval goldsmiths' skills. Pieces such as the Ishkhani Processional Cross from 973, the Khobi Icon of the Virgin Mary (tenth century), and the Martvili Cross and the silver roundel of St. Mamai from Gelati (eleventh century), and the famous Khakhuli Triptych (twelfth century) can be seen in the treasury of the Georgian State Museum. Sometimes these works were encrusted with precious stones, sometimes they were adorned with cloisonn? enameling. Artists such as Beka Opizari set the standards for this work, which combined a wide variety of techniques and materials for achieving a high point of pictorial representation. This work, like the standards in architecture, declined in the late Middle Ages.

Georgian mural painting reached great heights during the flowering of arts in the Middle Ages. National schools of a unique character developed through discovery and celebration of Georgian hagiography as well as through cultural contacts with neighbouring countries. The greatest creativity flourished between the eleventh and the first half of the thirteenth centuries.

From the fourteenth century onward the imported Byzantine Paleologian style predominated. Interesting examples of Persian influence during the sixteenth and seventeenth centuries can be seen in the secular portraits of founders. In the nineteenth century when Russia annexed Georgia and the Georgian Orthodox Church lost its autocephalous character, many frescoes were whitewashed and irreparably damaged.

We are left with only a fraction of what had been. The churches of Ateni Sioni, Udabno, Zemo Krikhi, Gelati, Vardzia, Timotesubani, Bertubani, Kintsvisi, Ubisi and Nekresi contain the most notable surviving examples.Best works of the 19th and 20th century modernist  artists Niko Pirosmani, Lado Gudiashvili, Elene Akhvlediani and David Kakbadze are exhibited in Georgia Museum of Art (Shalva Amiranashvili Museum of Fine Arts).

Large-figure sculpture was considered heretical by the orthodox Church and therefore never developed in Georgia. The consummate artistry of Georgian stonecarving can be seen, however, in the relief work on the facades and capitals of buildings as well as the decoration of altar screens. Techniques for stone carving developed hand in hand with those used for working with precious metals. Both traditions go back to antiquity, when native skills had already reached a high level. Contact with the Roman and Hellenistic worlds also contributed to the evolution of a Georgian style. The early incorporation of Christian iconography on top of pagan motifs is one of the most interesting elements of the early sculpture to be found in the fifth century. In the sixth century the influence of Sassanid Iran can be seen in some of the forms. The altar screens demanded by Georgian liturgy within the church became a focal point of sculptural decoration from the early Middle Ages. From the eleventh through thirteenth centuries, as mural painting took on ever greater importance, sculptural attention to the interior of a structure was almost wholly transferred to the facade where the full creativity of the sculptors flourished.
Monumental sculpture is certainly a feature of the twentieth-century artistic landscape. Only a small number are executed along the lines set down by the tenets of Socialist Realism. The overwhelming majority of work, especially when celebrating Georgian themes, bears the distinctive features of a national sensibility where the lesser journey toward faithful likeness is replaced by the search for the embodiment of Georgian archetypes. particularly noteworthy are the monumental sculptures of Elgudja Amashukeli throughout Tbilisi: the colossal Mother Georgia, the kneeling Pirosmani, and the equestrian statue of Vakhtang Gorgasali.