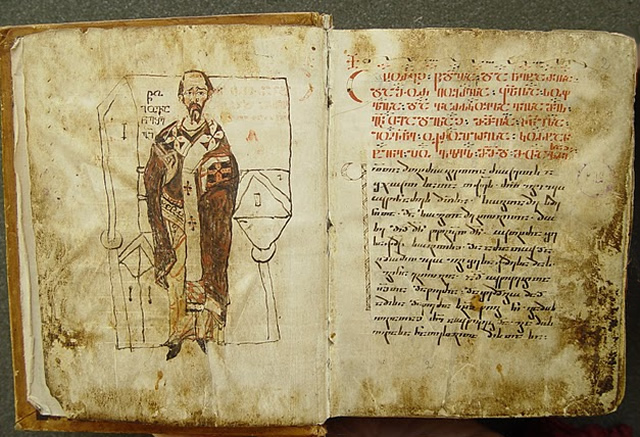 LANGUAGE VARIATION
Georgian is made up of a number of dialects that fall into two major groups: Western and Eastern. Among the Western dialects are what some scholars call mountain dialects. The standard language is based on the Eastern dialects of Kartlian and Kakhetian (Vogt 1971). At least one scholar (Hewitt 1985) claims that standard Georgian is based only on the prestige Kartlian dialect of the capital city Tbilisi.

The variation between the Georgian dialects is reflected at all levels of the language. Some of the dialects are isolated geographically--existing as enclaves in the mountains, for example, Xevsurian, or cut off from other Georgian dialects by other languages (Harris 1984). This explains why the so-called mountain dialects are considered linguistically conservative (Vogt 1971). These dialects, in some cases, retain features of Old Georgian that have been lost in standard Georgian.

ORTHOGRAPHY
Georgian is the only written language among the South Caucasian languages. A unique Georgian alphabet was devised following the country's conversion to Christianity in 337. The script does not differentiate between upper- and lower-case forms and consists of thirty-three characters.

LINGUISTIC SKETCH
Georgian is an inflected language. The language distinguishes eight nominal cases (nominative, ergative, accusative/dative, genitive, instrumental, adverbial, ablative, and locative) in one declension, and marks singular and plural by a suffix on nouns preceding the case marker. There is no grammatical gender. Pronouns are declined and display number and case for subject, direct object, indirect object, and possessive forms. Verbs can show agreement with the subject, object, and indirect object. The verbal system is very complex; the language makes two distinctions, between stative or action verbs and transitive or intransitive verbs. Tense/aspect divides into three series (present-future, aorist, and perfect), and the form of subject, object, and indirect object agreement marked on the verb varies by series.

Georgian has five vowels and a consonant inventory of twenty-nine phonemes, including ejectives. (Ejectives are sounds made with the air pushed out by the vocal cords instead of the lungs.) Consonants can occur in clusters of up to six sounds, for example in the word mcvrtneli 'trainer'. 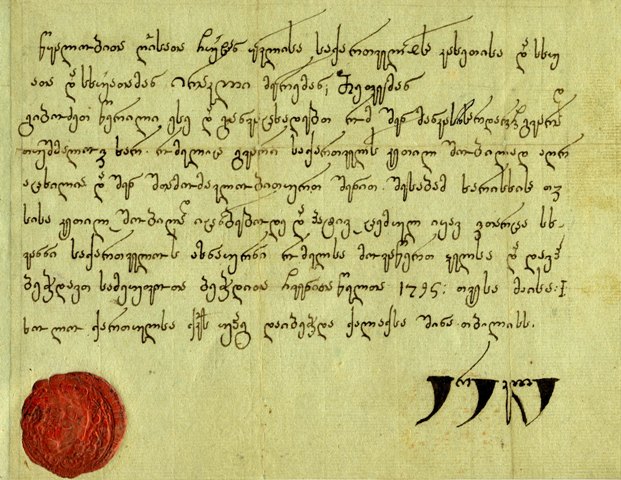 For fifteen centuries, Georgian has been the only written language within the South Caucasian family. The most ancient inscriptions of the language date back to the fifth century AD. Its rich literary tradition has remained uninterrupted from then to the present. It is also the liturgical language for all members of the Georgian Orthodox church. The conventional view dates the start of modern Georgian to about 1700.

The first printing press was established in Tbilisi. The 1860s saw a revitalization of the literary language led by three important writers: Prince Ilia Chavchavadze, Akaki Tsereteli, and Vazha Pshavela. Archaic literary standards were replaced by a more vivid and realistic style.

The Georgian alphabet is the script currently used to write the Georgian language and other Kartvelian languages (such as Mingrelian), The modern alphabet has thirty-three letters. Originally it had more, but some lettershave become obsolete.  The Georgian script makes no distinction between upper and lower case. However, certain modern writers have experimented with using Asomtavruli letters as capitals.

A 5th-century plate from Bolnisi with one of the oldest forms of the Georgian alphabet
The oldest uncontroversial examples of Georgian writing are an asomtavruli inscription in a church in Bethlehem from 430 CE. Gamkrelidze 1990 (Alphabetic Writing and the Old Georgian script) argues that it must have followed the advent of Christianity in Georgia (c. 337 CE), and that the forms of the letters are freely invented in imitation of the Greek model. However, many of the letter forms are similar to contemporary Sassanian Persian and Sogdian scripts, while the left-to-right writing direction and the order of the alphabet are Greek.
Older Armenian sources attribute the alphabet to Saint Mesrop Mashtots, who is credited with the invention of the Armenian alphabet, but this is not generally accepted.
There are other interpretations. One of the more contentious is that the asomtavruli alphabet was invented in 412 BC by Georgian priests of the cult of Matra (Persian Mithra), and reformed in 284 BC by king Parnavaz I of Iberia.
The Asomtavruli alphabet is known also as Mrgvlovani ("rounded"). Examples of it are still preserved in monumental inscriptions, such as those of the Georgian church in Bethlehem (near Jerusalem, 430) and the church of Bolnisi Sioni near Tbilisi (4th-5th centuries). Older Asomtavruli inscriptions have been claimed to date from pre-Christian times, the 3rd century BC to the 3rd century AD. These were found in Armaztsikhe (near Mtskheta) and Nekresi (in the Kakheti region of Eastern Georgia), in 1940 and 1995–2003 by the scientific expeditions of Simon Janashia (1900-1947) and Levan Chilashvili. The inscriptions from Armaztsikhe were investigated by Pavle Ingorokva.

Georgian Scripts
The Nuskhuri ("minuscule") or Kutkhovani ("squared") script first appeared in the ninth century. Asomtavruli and Nuskhuri, collectively known as Khutsuri (ხუცური, or "church script"), were used together to write religious manuscripts, with the Asomtavruli serving as capital letters. The modern alphabet, called Mkhedruli (მხედრული, "secular" or "military writing"), first appeared in the eleventh century. It was used for non-religious purposes up until the eighteenth century, when it completely replaced Khutsuri. Georgian linguists claim that the orthography is phonemic.

Based on Wikipedia - Georgian alphabet
and UCLA Language Material Project